'Name and shame' element for companies will be part of new approach, says Minister 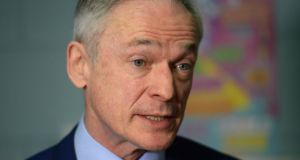 Minister for the Environment Richard Bruton: ‘It will be about getting people to sign up to pledges for change’. Photograph: Dara Mac Dónaill/The Irish Times

Minister for the Environment Richard Bruton has signalled a new range of punitive measures for companies that fail to reduce plastic consumption, including a “name and shame” approach for the worst offenders.

Speaking to reporters at the MacGill summer school in Glenties, Co Donegal, Mr Bruton said he will be taking a tougher stance on plastics, which will be outlined at a conference in September.

“We will be changing the fee structure so that companies that create waste will pay higher fees for waste that is difficult to manage, and we will be seeking for more carbon pledges or plastic pledges from companies who are in the retail and manufacturing area so this is an area where we can set very strong ambitions.”

He said the government will take a “tougher stance, firstly by modulating the fees, so there will be a charge, so those with an excess or non-recyclables will be paying more but we will proceed if necessary by regulation, we have set these targets, we will look at the suite of policies, some of them will be incentive and some will obviously be testing new ways of managing our waste streams”.

Asked if he would name and shame, for example, supermarkets that weren’t doing enough he said “that will be an element of this”.

“It will be about getting people to sign up to pledges for change, it will be charging those but it will also be empowering consumers because I think it is consumers that are really driving this agenda but we can improve collection methods (and) reduce contamination”

Mr Bruton was strongly criticised by young climate activists on a panel earlier in the day, who said that Fine Gael was looking to “pass the buck” on climate and that their response to climate change was characterised by cowardice.

Responding to these criticisms, Mr Bruton said his party has“squared up” to the fact that the state was going to miss its emissions targets by as much as 95 per cent. “I will be judged by our delivery, I am happy to be judged by the delivery on this plan”.

Eamon Ryan, who shared a panel with the Minister earlier in the day, said that he would “eat his hat” if Ireland was still offering licenses for oil and gas exploration in a year, raising the possibility that it could become a red line issue for the Green Party in any government formation negotiations. Mr Bruton’s department killed off a private members bill earlier this summer that aimed to curtail exploration.

“ I am certainly open to evaluating a route that is credible in this area. But to without notice end all exploration without considering the implications for energy security is not the way policy should be made and I want to make policy on a proper basis making sure the choices we make are the ones that impose least burden and the most help to make the transition,” he said.

Reacting to the Climate Action Committees recommendation to hike carbon tax to €35 a tonne next year, Mr Bruton said other countries have seen negative political fallout from the introduction of a carbon tax.

“We see in other countries, that there has been a reaction to the introduction of carbon pricing, even though everyone advises it is integral to a plan, you have to make sure in designing and implementing this, you make sure to bring people with us. And how we use the money that is generated will be absolutely as important as the price signalled.”