Soaring temperatures over 26 degrees as summer settles in 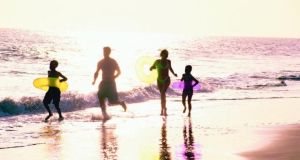 Tuesday is set to be another day of soaring temperatures and bright sunshine, according to Met Éireann. File photograph: Thinkstock/Getty Images

Tuesday is set to be another day of soaring temperatures and bright sunshine, according to Met Éireann.

Temperatures could rise to 26 degrees in mild, southerly breezes. While there may be the occasional cloud and even misty patches near coasts where temperatures are likely to be be lower, the island is expected to bask in summer conditions.

The forecast for the weekend, while featuring the odd shower on Saturday will also be mainly dry with good spells of sunshine and highs of 17 to 21 degrees. Sunday may see temperatures hit 22 degrees.

It will be humid at night with an increasing risk of an isolated thundery shower breaking out. Lowest temperatures will be in the region of 13 to 16 degrees.

Tomorrow, Wednesday, temperatures will fall back slightly but remain high, rising to about 24 degrees in places - still blissful summer weather by traditional standards. Some clouds may appear on Thursday to hold temperatures back while Friday will be fresher as the winds switch to westerly and highs of 16 to 20 degrees.

Overall the outlook is for good sunshine heading into the weekend but some intermittent cloudy periods. Misty conditions may persist near the coast and temps will be lower.

However the good weather has brought warnings from water safety bodies for families to take care when visiting beaches and swimming. On Monday a six-year-old girl was dramatically rescued from the sea in Portmarnock, Co Dublin after she fell off a an inflatable lilo, having been blown out to sea from onshore winds.

Irish Water has appealed to people to be safe and not to use inflatable toys as boats in the sea.