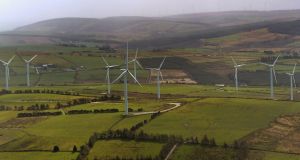 The failure to set out detailed, cost-effective proposals on how to decarbonise the Irish economy by 2050 represents a major obstacle to progressing policy on climate change, according to an independent advisory body.

The Climate Change Advisory Council claims the practice of using public funds to buy carbon credits from other countries, while enabling Ireland to comply with its EU emission targets, has no domestic benefit and will leave the country with a bigger and more expensive task to meet its future targets to 2030 and beyond.

In its third annual report which will be published later on Wednesday, the CCAC said “a significant and sustained rate of emissions reduction of approximately 2.5 per cent per year” was required to “meet our objectives for 2050.”

The council, which was established by the Government in 2016 to review national climate policy and Ireland’s performance on cutting emissions, claimed the introduction of “robust carbon pricing” was essential to support individuals and businesses to eliminate their greenhouse gas emissions.

The CCAC recommended that the carbon tax rate should be increased from its current rate of €20 per tonne to €35 in next year’s budget and to at least €80 per tonne by 2030.

CCAC chairperson, John FitzGerald, said revenue raised from the tax should be used to ensure a just transition to a low-carbon, climate-resilient and sustainable economy and society, while protecting those on low incomes.

The advisory body also concluded that there was the potential for a substantial reduction in agricultural emissions, which account for almost a third of all Ireland’s greenhouse gas emissions, while safeguarding farm incomes at the same time.

The CCAC said targeted measures to reduce the size of the national herd were necessary.

“In recent years the expansion of the national dairy herd has been the major contributor to increases in agricultural emissions. Reduction of the suckler herd would make an important and cost-effective contribution to mitigation,” it observed.

The CCAC said alternative land uses should be supported and reversing the recent declines in afforestation rates should be a priority.

Prof FitzGerald said Ireland was already experiencing the impacts of climate change and further steps were essential regardless of the success of national or global mitigation measures to date.

“The impacts of climate change often seems distant from everyday life, but we have experienced severe extreme weather events in recent years which have exposed the vulnerabilities of our society and economy,” said Prof FitzGerald. “Despite these events, awareness of the needs for adaptation remains low.”

The CCAC said adaptation would require significant investment from both the public and private sector as well as individual households.

“Awareness of the need for adaptation remains poor with corresponding low levels of willingness to take necessary actions,” the report stated.

It said the poor level of awareness was also reflected in Government policy where the need for adaptation remained “under-recognised”.

The council warned that key areas including coasts, housing and planning were not being addressed under plans for 12 key sectors that were currently being developed.

The CCAC also called for the closure of the ESB’s coal-burning power station at Moneypoint, Co Clare by 2025 and the ending of all peat-fired electricity generation by 2020.

In relation to the construction industry, the CCAC has said there was an urgent need to increase the skill sets to deliver the necessary retrofit programme for homes.

“The Government has the opportunity to lead by example through investment in local authority buildings and housing. This would provide certainty to businesses that there is a long-term commitment to retrofitting Ireland’s housing stock,” said Prof FitzGerald.

The council said it had not yet had the opportunity to examine the Government’s recently published Climate Action Plan 2019 in detail.

However, the CCAC noted that it proposed “a robust governance framework within which new policy will be developed”.

It acknowledged that the plan for the first time set out sectoral targets which, if achieved, would see Ireland meet its 2030 targets for reducing emissions.