The unsung fate of the ocean’s Atlantic herring 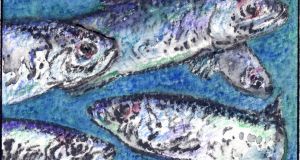 On a good summer’s day, the calm sea off the coast leaves its emptiness nowhere to hide. All the way from here to distant Inishbofin – 10km as broadband flies – there’s nothing but shimmering blue.

First landfall from my window is at the island’s East End, where the village curves prettily above the strand. It also looks out to the rocky rubble of the pier, overrun by the monster storm of five winters ago.

At the pier’s end, left ruinously intact, is the concrete shell of the old herring packing station, built before the market collapsed in the early 1900s. At its peak, ’Bofin drew a summer armada of fishermen to bring in the herring harvest.

My thoughts swung there from a heartfelt article in the summer edition of the quarterly Inshore Ireland. Dr Kevin Flannery, marine biologist and director of the Oceanworld Aquarium in Dingle, compares popular concern with threats to the honeybee, a keystone species on land, with the totally unsung fate of the ocean’s Atlantic herring. A widespread disappearance of the fish, he writes, “is causing the whole ecosystem to come tumbling down”.

The herrings’ pivotal role on the continental shelf as the prey of bigger fish such as cod and haddock is scientifically agreed. Their lives intertwine with salmon, seals, dolphins, even whales. But Flannery describes a fishery uniquely destructive to the herring’s spawning grounds in the shelving Atlantic bays of Ireland.

Its mass spawning on rocky and gravel seabeds is itself most unusual. Unlike cod, for example, which release their eggs for instant dispersal in the ocean, the shoaling herring lay a thick carpet of fertilised eggs on the seafloor. A single female can lay 200,000 eggs and even a small spawning shoal can number half a million fish.

The developing herring eggs, each in a nourishing blob of oil, were once a winter feast for inshore shoals of cod, pollack and whiting. But then came the Japanese hunger for kazunoko sushi, the golden herring roe served raw. (I remember my own pleasure as a boy on the Sussex coast when finding a roe in a crisply fried fish, the crunchy eggs popping between the teeth.) The Japanese demand for roe, arriving a few decades ago, made prices soar.

“Today,” Flannery writes, “pair-trawl after pair-trawl shoot on the same herring marks, up and down the coast, ‘ripping the gun’ . . . if the herrings are not ripe for our new market’s demands”. (The fishermen’s phrase describes pulling on a rope to open the cod-end of the net, releasing the catch into the sea.)

“As a result,” he continues, “thousands of tonnes of herring are slipped and left to rot on their birthplaces. The vast carpets of eggs that should have been on bay sea-beds are now nowhere to be seen. The waiting hordes of [predatory] fish have left the bays to return no more . . . all our bays are now empty.”

With his plea to fishermen to protect “our most valuable, our silver darling”, Flannery includes a map of their spawning grounds around Ireland. The biggest are offshore from Malin Head and the rest hug bays and major estuaries from Donegal to Waterford.

The first detailed study of spawning grounds, published in 2013 by the Marine Institute, included interviews with fishermen serving the herring roe industry. They described the “dense, conical-shaped schools upon the sea-floor” revealed on the screens of their echo-sounders and the gentle squeezing of roe from captive fish to judge their maturity.

There’s no reference to the slipping of catches as described by Flannery, long on close terms with fishermen in Dingle and elsewhere. And while the institute report grants that “high fishing mortality may be expended with little effort”, its concern for protection of spawning grounds gives most mention to encroachment by sea-bed structures, mining for gravel and dumping of dredging spoil.

Larvae from the 87 spawning beds mapped by the inventory swirl clockwise in currents around the island. Problems in monitoring herring populations must also reckon with the fish’s erratic boom-and-bust fortunes.

An international “Linking Herring” symposium, held in Galway in 2009, dealt with the challenge of defining separate stocks of a fish that spawns at different times on different coasts of the north Atlantic and Pacific and changes its migration routes as if on communal whim.

Herring have sustained huge fisheries, collapsed and then recovered. But, as a scientist’s report on the symposium concluded: “Exploiting herring in a sustainable manner may never be possible because its populations naturally come and go, even without exploitation.”

I’m fond of herring, bony as they are, but haven’t had a fresh one in years. Nor, I would guess, have many readers on an island that once had a surfeit, if mostly enjoyed on Fridays. I reach for its flavour in supermarket kippers, plastic-wrapped and microwaved. They come with a pat of butter, but no roe.