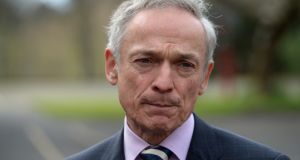 Minister for Climate Action Richard Bruton has come under sustained attack for the Government’s climate policies from two youth climate activists at the MacGill Summer School in Glenties.

Conal O’Boyle (16) and Jessie Dolliver (22) both strongly criticised the Government’s recent climate actions in speeches that were met with standing ovations and sustained applause from the audience.

Mr O’Boyle, a student climate activist from Muff in Co Donegal, told the Minister that climate change is “bigger than Brexit or the national broadband plan”.

“As a country, we cannot afford to be bullied by corporations at any time, let alone this time. The Government needs to take responsibility for our country and our problems, both domestically and on the international stage, instead of kicking them off down the road, which has essentially gotten us to this point.”

He said climate change had to be tackled by “top-down and by legislative change, and Fine Gael seemingly do not want to do that. We need leadership not cowardice. Fine Gael are trying to pass the buck on to the everyday citizen of the country, when ultimately, the buck stops with them. The Government hides the fact that they still grant oil licences by telling us that the only way to curb emissions is to buy an electric car.”

Ms Dolliver, a 22-year-old student from Trinity and a climate activist, also criticised the Government. She said Fine Gael was trying to “pit farmers and environmentalists against each other to try and take the focus off them”.

She strongly criticised the Government’s decision to kill off Bríd Smith’s recent Bill, which would have curtailed oil and gas exploration, with a money message. “Fine Gael’s pontificating about climate obviously is disingenuous,” she said, adding that the money message was “borderline undemocratic” as the Bill had passed two Dáil votes. She said there is a “vapid insincerity in the nation’s politics”, with “performative politics and partisan politicians who ultimately don’t seem to have any values”.

Speaking to the summer school, Mr Bruton described Ireland’s previous efforts to reduce greenhouse gas emissions as a “failure”. He said that current forecasts show Ireland will only achieve a 1 per cent reduction in climate emissions by 2020, far below the 20 per cent target set by the State for itself. “Ireland has not been lacking in ambition, but in delivery. There has been no roadmap, no coherent strategy that would in fact deliver on the commitments made. We cannot countenance another such failure. We did not make the structural changes in our economy and our society to allow us to hit that target.”

The Dublin Bay North TD also said that a massive development of the State’s infrastructure would be needed, including investment in building out the electricity grid and more wind farms, which have proved to be political lightning rods in the recent past. “They will require people to find money up front to do things on their home business and farm . . . the State while it can support and incentivise them, it can’t pay for all that change”.

Mr Bruton told the conference that his climate action plan envisages radical changes which will reach into every home and business in the State. “Symbolic gestures will do nothing to solve the climate crisis. There are no silver bullets. Responding to this crisis requires action across the board, led by the Government, with structures in place to ensure accountability.”

Mr Bruton told the summer school that therewould l be “profound conflict” ahead as the Government and wider society addresses the best way to introduce far-reaching changes.

Action will also be needed at European level, according to the Minister. He said the European Union “must seek to lead the change that is required and our capacity for solidarity will no doubt be crucial in this endeavour. A new toolbox will be required — one that leverages aid, trade, research and compacts in the pursuit of a radical shift towards decarbonisation.”

“This world is changing and if we do not act . . . We will not be passing on to our children homes and farms and enterprises that are resilient in the face of that change,” he said.

Climate scientist Prof John Sweeney, the emeritus Professor of Geography at NUI Maynooth, told the summer school that the world is “seeing an acceleration of [climate] problems in the last four years”.

Prof Sweeney said that historic data shows the ebb and flow of C02 content in the atmosphere, but “never anything like we have achieved in the last century or so on this planet”. He said that Ireland, as a rich person, had a considerable capacity to have an impact on global emissions. “We produce more C02 than the 400 million or so of the poorest people living on this planet,” he said.

“We have to be very careful about where we’re going – 1.5 degrees is the safety zone, and we are getting very close to it at the moment and we will pass it at some time in the next 12 to 20 years unless we take very serious action.”

He warned that species native to Ireland are faced with extinction, and questioned whether the Government was committed to tackling an emerging biodiversity crisis, pointing out that the State budget of €11 million per year for the National Parks and Wildlife Service compared to €16 million for the Greyhound Board and some €64 million for Horse Racing Ireland.

While he praised Mr Bruton for guiding the Climate Action Plan through Government, he added that “we can question whether 2 per cent reduction per year is enough and why it’s not more given the problems we have to face”. He urged the State to tackle the agriculture sector, which he said has grown hugely in recent years, with 676,000 more cattle in the State than in 2010.

Eamon Ryan, the Green Party leader, told the conference that he was willing to take his party into Government “because it’s part of the leadership we need to effect change from the top down”.

He said the Government’s 2 per cent target for reductions in emissions is “not good enough, not ambitious enough, that’s not the system change we need”. He said the Government would have to change the National Development Plan, and called out some of the State’s largest companies by name — including Larry Goodman’s Anglo Irish Beef, CRH, Ryanair and Glanbia. “Our own biggest companies have to change completely their business model,” he said.

1 Level 5 enforcement: Fines being considered for house parties and breaking 5km rule
2 Life under Level 5: What will the next six weeks look like for the State?
3 Covid-19: State moves to Level 5 for six weeks with hopes of ‘meaningful’ Christmas celebrations
4 Six weeks of Level 5: Non-essential shops to close, no visitors to homes and a 5km travel limit
5 Cork city centre is hit by flooding as river Lee bursts its banks
Real news has value SUBSCRIBE