Review of how the State processes forestry planting applications announced 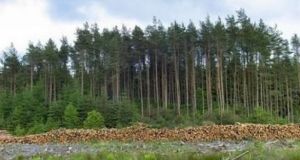 A review is to be undertaken of how the State processes forestry planting applications.

The move follows a similar review in Scotland which is credited with improving afforestation levels - the creation of new forest areas.

Andrew Doyle, Minister of State at the Department of Agriculture, who has responsibility for the sector, has announced his intention to commission the external review. It will be carried out by Jim Mackinnon, former chief planner with the Scottish Government.

“I have seen a similar analysis carried out by Mr Mackinnon for the Scottish Government on the approval process in Scotland, the results of which appeared to assist in terms of increased afforestation levels,” Mr Doyle said.

“I believe that it will be useful for an external party to conduct this review so that we can ensure our process is efficient and effective and continues to meet the expectations of all stakeholders.”

The meeting also discussed the forestry sector’s importance to the climate action, specifically its role in carbon sequestration and storage.

Earlier this year the Minister also announced an independent study on the economic, social and environmental impacts of forestry in Co Leitrim. Mr Doyle said it was in response to calls for a review of the effects of publicly-funded afforestation in the county.