Luas delays and overcrowding to continue ‘until March’

When longer trams come into operation, frequency of services ‘should be restored’ 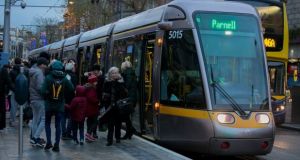 There were delays on sections of the Cross City Luas during its first morning rush hour on Monday. Photograph: Collins

Delays on the Luas Green Line following the start of operations of the new cross city tram, are likely to continue until next March, Transport Infrastructure Ireland has admitted.

The delays have resulted from a reduction in frequency of trams on the Green Line, which now runs from Bride’s Glen near Cherrywood to Broombridge in Cabra, from every three to six minutes to every four to nine minutes.

Passengers on some trams said it took more than eight minutes to travel from the Luas stop on Dawson Street to College Green. One bus travelling in the opposite direction took 22 minutes to cover 200m from Pearse Street Garda station to the front gate of Trinity College.

As many as six trams were lined up from O’Connell Street to College Green, unable to move.

The delays were partly attributed to technical problems, with traffic signals designed to give priority to trams.

Two sets of traffic lights on College Green started to malfunction at 8.47am, which caused trams and buses to back up as they approached what has long been recognised as one of the worst pinch points on the new tramline.

The signalling issue was largely resolved by Monday evening, and traffic, while still heavier than usual, did improve during the week.

However, commuters on the Green Line, which previously terminated at St Stephen’s Green, have reported long waits for trams and increased overcrowding throughout the week.

Transport Infrastructure Ireland spokesman Sean O’Neill said the frequency of trams on the line has reduced, which has “had an impact on the schedule” on the full length of the line.

“The frequency of the trams, before the extension of the line, had been every three to six minutes; it’s now down to every four to nine minutes.”

This reduction in frequency had a knock-on effect in delaying trams, he said, because with fewer services available, more people were stacked up on the platforms waiting for their tram.

“The larger number of people waiting to get the trams means it takes longer to get passengers on and off the trams. This high level of usage creates an irregularity in times.”

There had also been “technical issues” with the real-time passenger information services, he said, which meant the electronic displays indicating the time a tram was due “did not reflect the actual service”. Work was ongoing to resolve this issue, he said.

Seven new longer trams, 55m as opposed to the current 43m trams, have been ordered but are not expected to be delivered until February or March. Once these trams are in service, the frequency should be restored and the delays should end, Mr O’Neill said.

“The frequency issue won’t ultimately be resolved until March.”