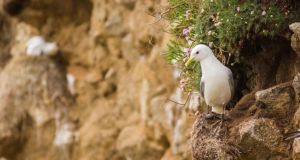 The black-legged Kittiwake in classical pose, perched on a coastal cliff face.

The survival of the Kittiwake, a small cliff-nesting species of gull which breeds in colonies around the Irish coast, is globally threatened, according to the latest Red List of threatened bird species.

The updated global list “makes for grim reading, but of particular concern here in Ireland is the plight of the Kittiwake (Rissa tridactyla), named for its distinctive ‘kitt-i-wake’ call”, said BirdWatch Ireland (BWI).

Overfishing and climate change are pushing seabirds closer to extinction, concludes BirdLife International (BLI) – it compiles the IUCN Red List of Threatened Species. These factors have affected the availability and quality of the Kittiwake’s key prey species, especially sandeels, during the breeding season.

Without sufficient food, Kittiwake colonies in the North Atlantic, including Ireland, and in the Pacific are struggling to feed their chicks, causing “disastrous” levels of chick survival in recent years, it warns.

“The alarming decline of the Kittiwake and other North Atlantic and Arctic seabirds, such as the Puffin, provides a painful lesson in what happens when nations take an ‘out of sight, out of mind’ approach to conservation,” said Marguerite Tarzia, European marine conservation officer with BLI.

“We know that unfortunately there have been substantial declines at many Kittiwake colonies in Ireland,” said Dr Stephen Newton, senior seabird conservation officer with BWI. “For example, at the key colony on the island of Ireland’s Eye, off Howth in Co Dublin, Kittiwake numbers have declined by 50 per cent over the past 16 years, to just 400 pairs today.

“Kittiwakes need to fledge on average about 0.8 young each year to maintain a stable population. This threshold is not being reached at many colonies, and in turn declines in breeding numbers are now being recorded,” he added.

For the adults, exposure to other threats at sea such as lack of food due to bycatch in fishing gear, pollution, and hunting in the Faroe Islands and Greenland have all contributed to the dramatic declines of the seabird.

Nesting Kittiwake numbers have plummeted by 87 per cent since 2000 on the Orkney and Shetland Islands, and by 96 per cent on the Hebridean island of St Kilda. Globally, the species is thought to have declined by about 40 per cent since the 1970s, leading to its reclassification as “vulnerable” on the IUCN Red List.

Although there is no national seabird monitoring scheme in Ireland, some colonies are monitored annually by BWI staff, committed volunteers and National Parks & Wildlife Service staff. “Monitoring” entails counting breeding pairs, checking how many lay eggs, and then seeing how many young they successfully rear.

“What is driving the poor performance in Ireland is not fully known, but poor food supply is certainly a factor. In 2016, GPS tracking of several adult Kittiwakes from Dublin showed that they were flying to areas close to the Isle of Man and North Wales in their attempts to find food.”

This means they were forced to be away from their nests for significant lengths of time, which gives more opportunity for predators to destroy their eggs and chicks. Similar tracking data from 2010 and 2011 showed adult Kittiwakes did not need to travel as far from the colony to find adequate amounts of food.

BWI has called on the Government to allocate more resources to seabird monitoring so a wider range of colonies can be monitored, to see if these results are replicated at other sites. It is also important that data is gathered on stocks of sandeels, sprats and other forage fish species in order to understand what is happening to food resources for seabirds, including Kittiwakes, it added.

It called for “greater protection for Ireland’s globally important seabird colonies, but most importantly, for significant action to meet our targets on greenhouse gas emissions, which are driving climate change and altering ocean temperatures”.