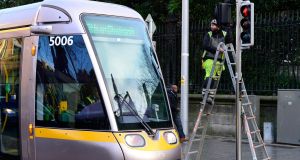 Adjusting the lights on College Street for the Luas. Photograph: Cyril Byrne

A “perfect storm” caused by failing traffic lights at a key junction, freezing weather and a new tramline navigating rush-hour commuter traffic for the first time led to gridlock across much of Dublin city centre on Monday morning.

Two sets of traffic lights on College Green started to malfunction at 8.47am which caused trams and buses to back up as they approached what has long been recognised as one of the worst pinch points on the new tramline.

Buses travelling from Pearse Street towards St Stephen’s Green took 22 minutes to cover the 200m from the Garda station to the gates of Trinity College, while the journey time from the former Central Bank building on Dame Street to the Westin Hotel on Westmoreland Street was similar.

Passengers on some trams said it took more than eight minutes to travel from the Luas stop on Dawson Street to the stop at College Green, a distance which could be covered considerably faster on foot.

Dublin City Council, staff from Transdev, the company which operates the Luas and the Garda traffic division all worked to deal with the signalling failure and by 9.30am, traffic started moving again. However, it took several hours for the knock-on impact to be lessened.

“If you are going to have a signalling problem then that is possibly the worst place to have it,” said Transport Infrastructure Ireland spokesman Sean O’Neill. “As soon as the lights stopped working as they were supposed to, traffic started to back up and it was a perfect example of how important effective signalling is as the problem spread rapidly throughout the city.”

Brendan O’Brien, of the council’s traffic department, said that in addition to the technical problems with the signalling system, trams encountered some problems with other vehicles.

“There were problems at College Green with bus encroachment on to the tramline, or the ‘swept path’ where the tram needs to turn,” he said.

There are several pinch points along the new line where trams must execute sharp turns while vehicles are travelling in the opposite direction. If buses or cars cross the solid white line in the middle of the road, trams are unable to make the turn.

This particular problem was a reflection of the large number of traffic movements and the difficult environment in College Green, Mr O’Brien said.

“When something happens in College Green there are knock-on consequences for traffic in the city centre.”

The council has applied to An Bord Pleanála to build a pedestrian and cyclists only plaza at College Green, banning traffic from travelling to and from Dame Street. The gridlock on Monday “reinforces the need for the plaza,” Mr O’Brien said.

The particular problems encountered by trams would be “ironed out” but Mr O’Brien said it was too early to say whether additional traffic restrictions would have to be put in place to ensure vehicles didn’t block the tram.

“Things were going pretty well up until 8.30am, and then things didn’t go well for about an hour. When any type of difficulty happens it causes knock-on problems, but it did take a while to recover.”

Dublin Bus said its worst delays were from 8.30am-9.30am, particularly on the northside. “O’Connell Street was completely backed up and that had a knock-on effect across the network.”

Ahead of Monday evening’s rush hour, engineers were on College Green ready to manually intervene and address any further problems although the evening rush hour passed off without any significant delays.

A spokeswoman for Transdev acknowledged that the Luas Cross City route had got off to a rocky start but said it was working with the council, Dublin Bus and other parties “to ensure this signalling issue is fully resolved”.