Leo Varadkar a ‘big fan of light rail. Once built it requires no subvention whatsoever’

An Taoiseach Leo Varadkar has officially opened the new Luas Cross City line, which will connect the existing green and red lines. 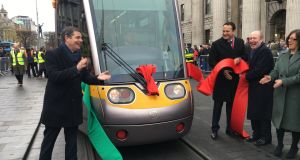 “How many ministers for transport does it take to link the Luas?” Taoiseach Leo Varadkar asked.

He answered his own riddle. “It appears it takes three – and we’re all here today.”

Leo doesn’t lie. For Minister for Transport Shane Ross was on hand, along with his predecessor in that job, now Minister for Finance Paschal Donohoe, and the Taoiseach himself, who had the transport gig before that.

Mr Varadkar was speaking as he formally launched the new Luas Cross City service linking the red and green lines.

The three men pulled away the red and green bow from the front of the Luas stop just before the GPO to mark the start of a service expected to result in an expected 10 million extra Luas journeys a year.

The Taoiseach estimated the service would reduce the number of car journeys by one million in the same time, as more people use the light rail line.

The new service extends the green line by an extra 13 stops to Broombridge, just beyond Cabra, where it connects to the Maynooth commuter line.

Four and a half years after construction started and just under six years after he gave the go-ahead as then minister for transport for the €368 million project, the Taoiseach said the service had come in on time and under budget.

Mr Varadkar said: “I’m a big fan of light rail. It’s reliable, easy to use, very attractive and once built requires no subvention whatsoever. It covers its own running costs.”

He pledged to significantly invest in and “start and see through to completion” a number of large-scale projects in the next decade, including the “Metro North to link Swords to Dublin airport, Ballymun to DCU and Drumcondra to the city centre”.

The Government has also agreed longer trams for the Luas green line to Sandyford.

There are also “tentative plans for further Luas lines to places like Poolbeg, which will be high density, an extension over the canal to Finglas and the big project, the F line to Lucan”.

He also cited the Dart expansion programme “electrifying our rail lines out to west Dublin and Kildare and Balbriggan and maybe in time even to Drogheda and Belfast”.

When asked about the extension programme to Drogheda and Belfast, Mr Ross said “it’s not on the radar for the next few years. It’s not an immediate possibility but obviously it’s part of our ambition.”

‘Get out of their cars’

The Minister hoped the new service “will encourage people to get out of their cars and join in the battle to ease city centre congestion and contribute to tackling our climate change challenge”.

The Luas runs right through the northside Dublin Central constituency of Paschal Donohoe, who as minister for transport witnessed the first excavations for the Luas extension and the initial laying of track.

He said there appeared to be an image of connectivity that “will involve all of us who live in and represent the northside going to the southside”.

Anne Graham, chief executive of the National Transport Authority, said with the Luas extension, “we are truly returning the heart of the city to An Lár”.

At peak times the service will operate every three to six minutes on the part of the line that loops around the eight-stop city centre segment.

At Broombridge the Luas connects to the Maynooth commuter line, which will operate every 10 to 15 minutes at peak times.

There are a number of positives for the service. In its environmental impact assessment, Transdev maintained there would be a 17 per cent drop in CO2 emissions in the city centre as more people leave their cars and use the Luas instead.

But there are road safety concerns for motorists, cyclists and pedestrians as the new service gets under way in a city centre where traffic flow and lanes have been greatly altered since construction began to allow for the Luas track lines.

A number of Luas driver health-and-safety representatives, members of Siptu, have claimed they have not received enough training on the line.

They say they were due to have 17 hours’ training on the line from St Stephen’s Green to Broombridge, but received just six. They say the new line is far more complex, with more hazards and busy junctions than the green and red lines, and warn of the possibility of accidents in coming weeks as drivers get used to it.

A spokeswoman for Transdev said any driver that requested more training would get it. She said each had received a minimum of 17 hours’ training on the new line, though she did not specify how many of these hours were in simulators and how many on the actual lines.

By launch day on Saturday they had completed “close to 2,000 return trips on the line. A small number of drivers asked for extra training and training and support is being facilitated for all who asked.”