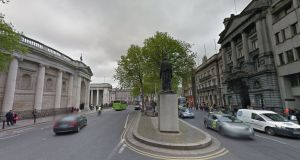 Dublin Bus wants to keep running buses through College Green, describing Dublin City Council’s plaza plan as “socially regressive”, and has suggested the plaza be built on one side of the road only. File photograph: Google Street View

Six of Dublin’s best-known luxury hotels, including the Merrion, Shelbourne and Westbury, have appealed to An Bord Pleanála against plans to ban taxis from the proposed new civic plaza at College Green.

A public hearing on Dublin City Council’s proposal to build the €10 million pedestrian- and cyclist-only plaza will by held by An Bord Pleanála next month.

The council last May applied to the board for permission to build the plaza and ban all traffic, including buses and taxis, from accessing Dame Street through College Green.

The board’s decision to conduct a hearing follows a substantial number of submissions which raised concerns about the potential detrimental effects of the decision on traffic, and on access to the city centre.

The high-end hotels, which also include the Westin, Marker and Fitzwilliam, said excluding taxis from the new plaza would have “seriously adverse consequences for access to the Grafton Street Quarter” and would “seriously impact on accessibility and ease of movement” around the city, and from Dublin Airport and Dublin Port to the central Dublin area.

The council’s submissions to the board did not appear to recognise “how important a role taxis play in the economic life of hotels”, the hotels said.

They also raised concerns about taxis’ future access to the new Luas tram line. Currently, taxis and buses are permitted to drive along the tram line from Dawson Street to Westmoreland Street. However, the council has said this dispensation is on a trial basis only and will be reviewed in the new year.

The hotels said there had been no analysis of the impact of a potential ban on taxis from this route.

“It is considered most unsatisfactory that taxis are only to be permitted to use this route on a trial basis,” they said. “There are other ways of dealing with taxi misbehaviours such as stopping on a clearway, ie under the existing road and taxi regulations, than threatening to ban them from the route.”

Separately, taxi drivers’ organisation Tiománaí Tacsaí na hÉireann, has lodged an objection with the board in relation to taxis’ exclusion from the planned plaza and the loss of 18 taxi stands in the area.

The ban on taxis running through College Green to Dame Street would create difficulties in bringing customers to bars, restaurants and hotels, and alternate routes would be circuitous, adding expense for customers, the organisation said.

Dublin Bus also wants to keep running buses through College Green, describing the council’s plan as “socially regressive”, and has suggested the plaza be built on one side of the road only. Dublin Chamber of Commerce is supporting Dublin Bus in its bid to keep services in College Green.

The council said it would not be possible to maintain pedestrian priority in the plaza if the space was shared with traffic.

“The closure of College Green to all traffic, and the rerouting of most bus services and taxis away from this location, will greatly reduce the traffic volumes along Dame Street to and from College Green,” the council said.

The hearing opens on January 9th.