Suu Kyi stripped of Freedom of City of Dublin award

Councillors vote to strike Myanmar leader from roll of honour 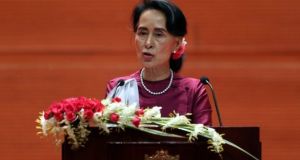 Councillors voted to rescind their 2000 decision to bestow the Freedom of the City on Aung San Suu Kyi. Photograph: Aung Shine Oo/AP

Myanmar de facto leader Aung San Suu Kyi has been stripped of her Freedom of the City of Dublin award, following an overwhelming vote of Dublin city councillors.

Councillors voted on Wednesday night to rescind their 2000 decision to bestow the Freedom of the City on Ms Suu Kyi and instructed council chief executive Owen Keegan to remove her name from the “Roll of Honorary Freedom” because of the repression of her country’s Rohingya Muslims.

The council also agreed to a request from Bob Geldof to remove his name from the roll.The Dublin-born singer, activist and businessman handed the scroll recording his freedom of the city back to city council officials last month in protest at the honour being held by Ms Suu Kyi.

Geldof called the Myanmar leader “a handmaiden to genocide” as he returned the scroll that he received from the council at a ceremony in 2006. The Boomtown Rats frontman said he would be a hypocrite to share honours with “one who has become at best an accomplice to murder”.

Geldof subsequently wrote to the councillors, ahead of a meeting last week where councillors had been due to vote on whether to revoke Ms Suu Kyi’s award, urging them to do so.

However, the meeting was adjourned before the issue was reached. Following that meeting, U2 also wrote to councillors urging them to rescind the award. The band, who wrote their 2001 song Walk On about the Burmese politician, said that they believed Ms Suu Kyi’s failure to stand up for the rights of the Rohingya people “constitutes a betrayal of the principles for which she was so revered and for which she received the Freedom of the City”.

Lord Mayor Mícheál Mac Donncha said he had proposed Ms Suu Kyi be stripped of the Freedom of the City a number of months ago on the basis of the “horrendous treatment” of the Rohingya people, “with which we can only conclude Aung San Suu Kyi has been complicit.” He added that it was “nothing to do with any personalities who may have flown in and flown out to give their views on it.”

Labour councillor Dermot Lacey was one of just two councillors who voted against the motion. Ms Suu Kyi had “made enormous progress in democratising Burma”, though not enough as the military were clearly still in charge, he said. He added that removing anyone from the roll of honour could set off a chain of similar requests, which was not in the best interest of the people of Dublin.

Fine Gael councillor Naoise Ó Muirí also voted against, saying “the cause of the Rohingya will be no further advanced” by the move.

The freedom of the city has only been removed from an individual once before. German academic and Celtic scholar Kuno Meyer was stripped of the honour in 1915 due to anti-German feeling during the first World War, but it was restored after the war in 1920.

Myanmar, a predominantly Buddhist country, has been accused of ethnic cleansing of its minority Rohingya Muslim population. Ms Suu Kyi has denied this accusation from the UN, saying that the crackdown in the Rakhine state in western Myanmar was aimed at rooting out violent militants.

More than 600,000 Rohingya Muslims have sought sanctuary in neighbouring Bangladesh after the military launched a counter-insurgency in northern parts of Rakhine following attacks by Rohingya militants on an army base and police posts in August.

1 Coronavirus: One more death in Republic as expert warns house parties are ‘disaster’ for containment
2 George Floyd death: Man shot and killed by law enforcement in Kentucky
3 Six counties free of new cases of Covid-19 over past week
4 Schools may reopen in July for children with special needs
5 Diver (35) suffers spinal injuries after hitting rocks in Co Cork
Real news has value SUBSCRIBE