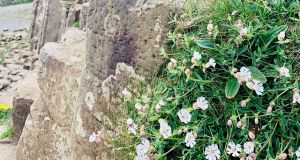 Nature has taken advantage of the absence of visitors at the Giant’s Causeway.

At the Giant’s Causeway, the flowers are flourishing.

More than a million people last year walked on the North coast’s famous hexagonal stones following in the footsteps of its legendary builder, the giant Finn McCool. The absence of such visitors since the lockdown has given nature an opportunity.

Wild flowers – particularly the vibrant yet hardy sea pinks – have been growing up between the stones in recent weeks, creating splashes of colour amid the grey basalt of the columns.

“We have never had them in such numbers, or had them grow so tall. That’s been something special to see,” says Jennifer Michael from the UK National Trust.

“Because of visitor footfall they would never grow as big. It’s been lovely to see, and interesting how across the world nature has responded to the lockdown.”

She has also seen more stoats and rabbits. The birdsong has been “incredible”, she adds, a combination of having little other noise around and the apparent presence of more seabirds.

“It’s an unprecedented situation, where we get to see what places look like when nature is left largely alone.”

Michael describes herself as “lucky”; a senior marketing and communications officer with the National Trust in Northern Ireland, during lockdown she has become one of six people tasked with carrying out site checks at the Causeway and another nearby trust property, Carrick-a-Rede rope bridge.

Once a week she walks the two sites, checking for litter – their regular litter pickers, like other trust staff, have been furloughed under a UK government support scheme – and making sure that both attractions are safe and secure.

She describes it as “lovely but also quite eerie. It’s so strange, I’ve worked there for five years and it’s just unprecedented that you would have no one around you.

“It has been a privilege to be able to go to such a beautiful place as part of your work whenever we’re in lockdown and people have been missing the sites.”

The visitor centre at the Giant’s Causeway has been closed since March as a result of the restrictions to limit the spread of coronavirus. However, the outdoor walking trails – the Causeway stretches over 5km on the north Antrim coast – remain open, as is a public right of way which leads down to the stones.

In the North, the coronavirus restrictions contain no specific reference to distance comparable to the 5km limit in the Republic. Instead, the guidance has been to avoid unnecessary journeys and to remain close to home; people can travel for exercise, though the advice is not to travel too far and avoid places where there are likely to be lots of people.

Throughout the lockdown there has been “maybe one or two people a day” on the trails, says Michael; “thankfully, largely, people have been obeying the guidelines and staying away”.

However, she has seen more people since the North’s regulations changed allowing groups of up to six to meet outdoors providing social distancing is observed (the same change is being introduced in England from Monday). “Largely it’s just been small groups or two or three people, just out enjoying nature and getting a walk. A lot of people have been saying that they’ve missed seeing the sea.”

The Northern plan for exiting lockdown is divided into five stages, which are categorised by criteria rather than date. It is currently in stage one. Michael reckons that the visitor centre will not be able to open until stage three, which may not come until July.

Being able to visit the Causeway during lockdown has brought home to her “just how much we all do need nature”, she says.

“So many people who maybe wouldn’t stop to listen to the birds or look at blossoms have been commenting and taking photographs, and there have been so many beautiful images of nature shared on social media.

“I think that deeper appreciation of the natural world is something that lockdown has really brought out in all of us, and hopefully moving forward we will all take a little bit more care of it.”