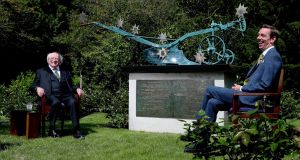 President Michael D Higgins in front of a memorial where, in April this year, he laid a wreath for all workers who died through exposure to the Covid-19 virus. Photograph: Maxwell’s

President Michael D Higgins has called for new and radical thinking about how to reform Ireland in the wake of the Covid-19 pandemic, including the provision of vital services and the issue of low pay and precarious work.

In a wide-ranging interview on RTÉ’s Late Late Show, he also spoke of his “great faith in the Irish people going forward”, and urged a “generous, tolerant debate” about the future of the country.

Asked what he thought of the term “cocooning”, he said “I don’t like the word at all. It would be better if you said “special care in isolation” or “assistance to self-isolate”.”

He said that in relation to older people, “there were mistakes made in the language. We should not have fudged what was mandatory and what was discretionary.”

Referring to his previous professional life as a sociologist, when he studied ageing, he said: “It took us a long time to get away from infantilisation, as we used to call it, in ageing ... we’ve got out of a lot of that, but we’re not fully out of it.”

He revisited several times the issue of low pay in society, in particular for those working in frontline roles.

The President praised the Irish people’s response to the crisis, saying “we have been responding with kindness, compassion and extraordinary generosity”.

However, he said that a reappraisal of social issues such as housing, healthcare, elder care and precarious employment was needed.

“For those workers in precarious employment, we owe it to them to go back with that precariousness removed ... we need to look how we can give a livable income to people not just to survive but to be able to participate in society.”

“This is very, very different to 2008,” he said, “That’s why we need new thinking, radical thinking – and it’s there – and I hope there’s a generous, tolerant debate about it.”

He paid particular tribute to the healthcare workers “who have died delivering an extraordinary courageous delivery of their work on behalf of the Irish people” and those who he said, in going to work, “are delivering themselves into the shadow of Covid every day”. He also praised lower-paid workers, saying “these are the essential workers in society without whom society couldn’t function”. He called for a “follow through” looking at the terms of their security of employment, conditions and pay.

He also said the banking sector should “come to the table with an instrument which can deal with those who are having short-term liquidity” issues. He argued that “those responsible for liquidity will have to step up” when it came to businesses that are struggling.

He said the chance existed for a “great promising moment” in how healthcare, housing and childcare and other services are delivered in the State.

He made special mention of the people who had lost their lives in long-term residential facilities such as nursing homes. Speaking in front of a sculpture of the Plough and the Stars, where earlier this year he marked international workers day with union leaders, he praised also the courage of those who worked in such facilities.

“There’s the deep stress of people who are working with such people, and whose colleagues may have come down with the virus and what kind of extraordinary commitment was it for people when, with staff going down all around them, to still try to keep going in these terribly difficult conditions,” he said.

He said there was a “need [for] citizens who are able to debate the economy, we need an economic literacy that will empower people”.

He spoke of his “great faith in the Irish people going forward,” but warned that “the very last thing we need are prophets of doom”.