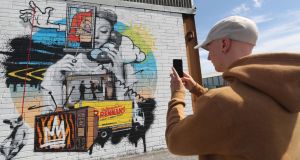 A man photographs a street art mural by the artist ADW in Portarlington, Co Laois. Entitled ‘Is it Still raining? I hadn’t noticed’, the work deals with the issue of mental health during the Covid-19 lockdown. Photograph: PA

A further two people have died from Covid-19, the National Public Health Emergency Team (NPHET) has reported in its latest statement.

There have now been a total of 1,652 coronavirus-related deaths in the Republic.

Over the past week the number of deaths announced daily has been in single figures, apart from Wednesday, when 17 deaths were reported. There were no new deaths reported on Monday.

Earlier, Dr Gabriel Scally, the public health expert who conducted the State’s report on the cervical check scandal, backed the current Government roadmap on easing restrictions, arguing that a “rush” to relax restrictions more quickly could lead to a second wave of Covid-19.

Dr Scally said he thinks the roadmap being followed in Ireland “is a very good one”.

“For the benefit of us all, we need to get this right, and a rush to make up for all those weeks that we’ve been bottled up could lead us in the wrong direction and could lead to a resurgence of this (virus),” he said. “Don’t rush it.”

He acknowledged the importance of the economy and business as it “contributes enormously to public health – people need jobs and money in their pockets, and they need to be able to look after themselves and their families,” he said, speaking to Gavan Reilly on Newstalk FM’s On The Record this morning.

“I fully understand that, but the last thing business needs is to have another outbreak.”

He was speaking after a number of Sunday newspaper reports indicated the Government is considering accelerating parts of the exit from lockdown.

The Business Post reported the Cabinet is considering speeding up the extension of travel limits, or scrapping them altogether, as well as relaxing visitor restrictions to nursing homes.

The Sunday Independent reported that the 20km limit for travel could be relaxed three weeks early, and that museums, galleries, hairdressers and other businesses could be allowed to reopen by the end of June.

“I think waiting to stage 5 is too far. I would like to see stage 5 abandoned and progressively bring things forward. The 20th of July is long enough. You will ruin the tourist season entirely if you drift into August,” he said.

In phase one which started on May 18th people were told to continue to avoid unnecessary journeys, up to four people not of the same household may meet outdoors while maintaining strict social distancing. In phase two, which is due to come in on June 8th, restriction on movement will be increased to 20km but unnecessary journeys should still be avoided. Visits to homes of over 70s and medically vulnerable are allowed by no more than a small number of people for a short period of time. Up to four people may visit another household for a short period while maintaining strict social distancing. Phase three will start June 29th but there will be no increase on the 20km limit on travel. Organisations with low levels of daily interaction with people and will reopen, but workers who can work from home should continue to do so. From July 20th in phase four, people will be allowed travel outside their region. Slightly larger numbers of people may visit another household and small social gatherings by such as small weddings and baptisms may be allowed. Phase five on August 10th will allow for a lot of businesses to reopen including pub, shopping centres, nightclubs, and tattoo and piercings services while social distancing is maintained. However, large social gatherings will be restricted due to risk.

The Sunday Times reported that the Government has asked officials to examine whether tourists could take “rapid tests” at Irish airports as an alternative to quarantine measures, which have been criticised by Ryanair group chief executive Michael O’Leary.

Dr Scally said he would like to hear more about rapid testing, but warned he was not aware of any quick test that would give a result with any degree of certainty.

He backed the Government’s approach of requiring entrants to the country to give an address and undertake to self isolate there, and said that “in the absence of that, I would absolutely think the holding of people in a hotel or whatever until it’s safe for them to go about their business would be a good alternative.”

Dr Scally, who was copied in a letter from Ryanair’s Mr O’Leary to Minister for Health Simon Harris criticising the measures this week, said: “I’m happy to debate public health with Michael O’Leary. Personally speaking, and I know a lot of people feel the same, I’d rather he got on with refunding all the people all the money he owes from the flights he’s cancelled and gets on with running the airline and leaves public health to the public health authorities.”

He said debates over quarantine were “a bit of a nonsense unless we sort out the different arrangements between the UK and Ireland and North and South in Ireland.” He urged a joint approach to eliminating the virus on both sides of the border.

“If we could do this on the whole island of Ireland, then we could relax everything providing we kept the travel restrictions into and out of the island. We wouldn’t need any lockdown or any restrictions at all, but that depends on us getting the virus down to zero cases. It can be done, other countries have done it, and we should be trying to do it on this island. Why can’t we be like New Zealand?,” he asked.

Mr Ahern also said he was nervous about lifting travel restrictions. “I’m worried about what happens when the airports open up and when people from all over the world start arriving in Dublin. I’m far more worried about that than today.”

He also said the Government has done a good job. “There’s been lots of problems on the way and I look at those as things we should learn from. We made a hames of leaving the Italians in when there was no match. Equally crazy to send 50,000 to Cheltenham. ”

Regarding screening programmes, Dr Scally said “some can resume pretty rapidly”, but that others would take longer to come back, which could be partially mitigated by self-administered screening for some cancers. He strongly urged those with symptoms, however, to seek treatment.

“Certainly what we do need is a structured return as soon as possible to providing care for people, particularly those showing some symptoms of cancer to get urgent treatment, urgent investigation now,” he said.