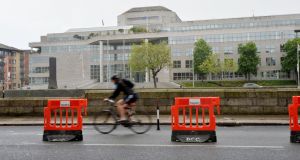 A newly-installed cycle lane and pedestrian lane installed on Ormond Quay by Dublin City Council, which reduces the usual two lanes of vehicular traffic down to one. Photograph: Alan Betson

The new National Transport Authority (NTA) and Dublin City Council Covid-19 “mobility intervention programme” represents the most radical redrawing of the city streets the majority of Dubliners will ever have witnessed.

They would have to go back to the 1970s and 1980s and the terrible destruction wrought by road widening in Clanbrassil Street or Parnell Street for something similarly dramatic, but that was piecemeal rather than wholesale change.

Perhaps the more apposite comparison would be the work of the Wide Streets Commission, which transformed the capital from a medieval to a Georgian city from the mid-18th century.

While this plan won’t see the construction of a new city, it is the most comprehensive revision of Dublin’s streets that has ever taken place since.

Cyclists are the big winners in the plan, and they need to be. This is not to say pedestrians haven’t had the rough end of the stick, with overcrowded footpaths, very few pedestrianised areas, and unfairly long waits for the ‘green man’ while waiting to cross roads so as not to disrupt the flow of motor traffic.

However, the incredibly poor cycling infrastructure and lack of barriers, both physical and in terms of enforcement, to stop motorists parking and driving in cycle lanes, puts cyclists’ lives at risk on a daily basis.

The city council now says it wants a threefold increase in cycling numbers from just over 13,000 to 39,000.

Over the past decade or so the number of cyclists has grown from fewer than 5,000 to the current levels, despite their shoddy treatment in terms of road provision. But a levelling off of their numbers in the last couple of years would indicate the less confident cyclist is not prepared to commute unless there is radical change.

This plan is that radical change. Two interventions to arrive on the streets in recent weeks will be the template for cycling infrastructure throughout the city.

The first was the creation of a segregated cycle path along the Liffey’s north quays protected by bollards. Similar systems will be put in place throughout the centre and on 14 approaches to the city.

For example, the Rathmines to Dame Street route, which the report says is “the busiest artery on the southside” for pedestrians and cyclists will have widened footpaths and bollard-protected cycle paths from Camden Street to George’s Street. Work has already begun on their installation. On the far side of the Grand Canal a “bus gate” is being considered, which would effectively ban cars from using Rathmines Road as a route to the city.

Similarly, on the northside, protected cycle lanes and widened paths will be put in place from Phibsborough to the quays, on the direct route down Church Street. This will see the elimination of one of the city’s entirely pointless cycle paths – northbound on Constitution Hill – where the cycle lane is painted on to half a traffic lane to the junction with Broadstone bus garage, and is rarely free of cars.

Two of the city’s dual carriageways, Dorset Street and Clanbrassil Street, have always been logical places for segregated cycling infrastructure, given their width. This plan finally makes it happen.

The second is the new contraflow cycle path on Nassau Street. Despite calls from councillors for years, only a handful of contraflow lanes have been installed in the city.

The report does acknowledge that fear of the coronavirus and the reduction of capacity on public transport will mean more people will “wish” to use their cars. It attempts a softly, softly approach, reassuring drivers and, presumably, car-park owners, that city-centre car parks will remain accessible. However, it is clear there will be far less space in the city for cars with the removal of on-street parking and the reallocation of traffic lanes to pedestrians and cyclists.

The report moots the opening of car parks on the “periphery of the city” from where people could walk and cycle, but it doesn’t say where these would be located. It also suggests a wider application of the 30km/h speed limits.

The pedestrianisation of narrow city streets will be subject to so-called “stakeholder” consultation and requests from businesses. College Green is in line for pedestrianisation, on a phased basis.

This is where the greatest changes for bus users come into play. Buses will largely run along three routes to cross the river, a “central” route – O’Connell Street and the quays to Dawson Street-Kildare Street; “eastern” – the quays to Pearse Street; and “western” – Winetavern Street to the quays, all designed to avoid the use of George’s Street, Dame Street and College Green.

The number of buses using each stop will be reduced, and some stops may be closed to prevent overcrowding at queues, or as the report says, in a tone which might rankle with some: “Everyone likes to be able to get on their bus at their favourite stop. However, the space available at some of our city-centre bus stops will not facilitate an appropriate level of social distancing.”