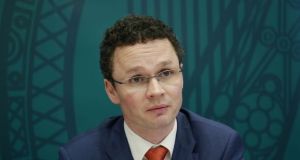 Changes to the State’s enhanced pandemic social welfare payments are to be considered this week, Minister of State Patrick O’Donovan has said. File photograph: Nick Bradshaw

Changes to the State’s enhanced pandemic social welfare payments are to be considered this week, Minister of State Patrick O’Donovan has said.

Speaking on RTÉ’s Week in Politics programme, Mr O’Donovan said that out of a labour force of around 2.5 million people, some 1.6 million are either public servants already or receiving some form of payment from the State.

“It is not sustainable going forward that we have 1.6 million people drawing an income support at some level from the State and 900,000 not drawing a support. We have to get to a situation as the economy reopens that we have more and more people transitioning back (to work),” he said.

He said: “The cabinet are going to meet this week, that’s my understanding, and this is going to be part of the discussion around the whole pandemic unemployment payments.”

Asked if there could be changes to the Pandemic Unemployment Payment (PUP) in the week ahead, he said: “Yes there may be.”

According to statistics released last Monday, the number of people receiving the Covid-19 PUP has fallen to just under 579,400. Of those, some 33,400 were receiving their last payment as they were returning to work following the relaxation of some restrictions. This is on top of the 214,700 people receiving Jobseekers Benefit at the end of last month.

Speaking on the same programme, Sinn Féin’s housing spokesman Eoin O’Broin called for the payment to remain in place until the end of the year.

“These are vital income supports for families, families who would otherwise be racking up very significant levels of debt… but they’re also vital supports for the local economy, and just as businesses are starting to reopen, we need people to have money in their pockets to be able to spend to keep those businesses alive,” he said.

Also on the programme was Robert Troy, the Fianna Fáil spokesperson on business, enterprise and innovation, who said an accelerated reopening of the economy should be considered. “We have to start looking at how we start accelerating opening up our economy, because if we don’t, we’re not going to have the necessary resources to put in place to ensure that we have an adequate public health service,” he said.

Verona Murphy, the Independent Wexford TD who may yet have a role to play in government formation as part of the Regional Independent Group, called for a more bespoke application of the two metre social distancing rule.

“It’s hard to see how we could prolong the two metre guidance, and it should be looked at sector-by-sector, public health is paramount, there’s no doubt about that, but we have to look at in the round,” she said. “This has to be looked at and looked at seriously”