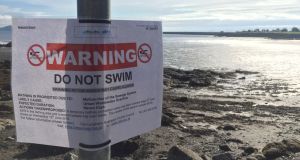 ‘They should really have a major, major sign when you come down here.’ 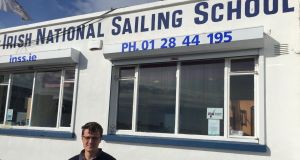 Glyn Williams: ‘If this is something that will keep happening it will have a huge impact. For others around here it would mean potential shutdowns.’ 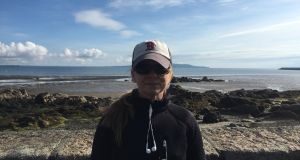 Heather Lawlor: The coast itself looks the same as always and ‘doesn’t smell any different... It just smells like sea.’

Swimmers and dog-walkers were surprised not to see bigger signs and flags on Seapoint beach on Friday after a swimming ban for south Dublin’s coastline was issued following an overflow of sewage at a treatment centre in Ringsend.

Local authorities have said the ban, covering all beaches and other bathing areas, will remain in place until next Wednesday.

However many beach-users didn’t see the sign or forgot about the ban leading them to wonder why there wasn’t bigger notices or flags erected to make sure everyone was warned.

Drying off after his routine morning dip at Seapoint in Co Dublin, Tom Jones (60) says he was not aware of the swimming ban in place across the entire south Dublin coastline following a sewage overflow from Ringsend treatment plant.

“There are no signs,” he says, looking around the stony enclosure. At this point he spots an A4 poster tacked to a poll by the Martello Tower that reads: “WARNING: DO NOT SWIM”. “Oh… Well there is a sign there,” he says, chuckling. “That’s very small though. They should really have a major, major sign when you come down here.”

He didn’t notice anything out of the ordinary while in the sea, he says. “I was down yesterday and the water was just lovely. It was exactly the same today,” he adds. Mr Jones, who is from Donnybrook, will stay away until the area gets the all-clear, but he suspects many of Seapoint’s regular bathers will carry on regardless. He isn’t too concerned about his health as he was “careful not to swallow any water”.

News of the ban spread quickly on social media among the dog-walking community, says local resident Heather Lawlor (51). While she sometimes brings her dog down to a corner of the beach, she will stay on the higher path while the ban is active. It is important to warn other dog walkers, she adds, as “people think about swimming and don’t realise their dogs could be affected.” Just yesterday she saw the blue flag flying and lifeguards on duty, she recalls. Today’s notices are “good to see”, but she is surprised there isn’t “a flag of some sort” to warn people against entering the water. The coast itself looks the same as always and “doesn’t smell any different,” she says. “It just smells like sea.”

Wading back to shore, Austin Kenny (60) groans as he remembers the news. “I heard about it last night, but I completely forgot,” he says, adding that he walked right by the warning notice without seeing it. He and his dog Rosie were “only knee deep” in sea water, so he hopes he will live to tell the tale. “I assume I am not going to die, or else they would have had to cordon off the whole area,” he says. While he will go home to “immediately shower”, he says: “It’s probably just over-the-top health and safety compliance. I’m not too worried.”

Keeping their distance from the water, Lucy Byrne and her 2-year-old daughter are making sandcastles. “I know it’s slightly contentious now, but hopefully we’re relatively safe playing in this little corner,” says Ms Byrne. With the sun shining, she notes the unfortunate timing of the ban. “It’s really awful, to be honest. Without a doubt this will have a big impact on people around here,” she says. A Monkstown resident, she remembers situations like this happening in the past, but nothing “quite so extensive”. “It should be addressed immediately to limit any future occurrences,” she says, adding: “People will still be a bit suspicious after this and wonder at the back of their minds if it is completely safe.”

A short walk up the coast, a group of teenagers in lifejackets are unlocking sailboats. For the Irish National Sailing School, situations like this require risk management, says Communications Manager Glyn Williams. “It is very frustrating as it dramatically curtails what activities we can do,” he says. Kayaking is off the schedule, but the seven to ten-year-olds will be able to head out in small keelboats. “Luckily for us we can switch up boats, so the risk of falling into the water is very very unlikely,” he says. While the school is “very fortunate” to have a large variation of boats, there are other providers who “could well have to close,” says Mr Williams. With just a 12-week summer season, having to repeatedly implement these alternative measures could take its toll. “If this is something that will keep happening it will have a huge impact. For others around here it would mean potential shutdowns.”