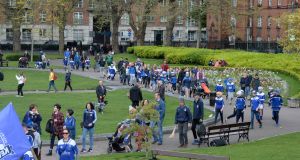 A flash mob of hurling and camogie players protested in May at the lack of green space in Dublin 8 after Templeogue Synge Street GAA Club proposed redeveloping part of Dolphin Park to accommodate 161 homes. Photograph: Dara Mac Dónaill/The Irish Times.

Plans for the construction of more than 160 apartments and townhouses on GAA club lands in Dolphin’s Barn have been refused by Dublin City Council.

The decision follows more than 160 objections to the loss of green space and playing fields in the area being received by the council.

Templeogue Synge Street GAA Club had sought permission to build 153 apartments, seven townhouses, and one house on its lands at Dolphin Park close to the Grand Canal.

Local residents, politicians, and hurling and football clubs that use the grounds said almost 30 per cent of the green space on the site would be lost, which would jeopardise the future viability of local sports clubs.

Players from Kevin’s Hurling and Camogie Club and hundreds of locals last month held a “flash mob” protest in St Patrick’s Park against the development.

Kieran Rose, a retired senior planner with the council, also objected to the plans saying there were “no exceptional circumstances” to justify the scheme which he said would contravene the city development plan. He added that the Dublin 8 area was “seriously lacking in green space”. With some 50,000 residents, Dublin 8 has the lowest ratio of green space to population, he said.

Templeogue Synge Street GAA Club said the residential development would occupy 15 per cent of Dolphin Park and was necessary to fund the planned upgrade of the playing and dressing-room facilities, which would benefit the wider sporting communities of Dublin 6, 8 and 12.

In its application to the council, the club said it had obtained permission in 2006 for a “similar development” of 100 homes. However, due to the economic crash it failed to secure a development partner and the club was left with debts of more than €1 million as a result. It said this debt had left the club in a “very difficult position” and made it impossible to carry out any capital investment in its facilities.

The land is zoned “Z9” to “preserve, provide and improve recreational amenity and open space and green networks”. This zoning states that in “highly exceptional circumstances”, in order to serve the long term retention and consolidation of the sporting facility in a locality and to secure the primary sporting land use on the site, “some limited once off development is open to consideration”.

However, the council said the applicant had “not adequately demonstrated” that the proposals would constitute “some limited once off development”.

The scale and mix of the uses proposed at this site, and the loss of “the city’s green infrastructure, in an area already deficient in green space” would be contrary to development plan policies, it said.

The development would also cause traffic problems, risks for pedestrians and cyclists, and would adversely impact the future operation of Bus Connects Services. It would also “seriously injure the residential amenities of property in the vicinity” the coucnil said.