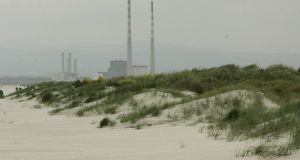 The entire south Dublin coastline has been put off limits to bathers following a sewage overflow at a wastewater treatment plant.

Local authorities have said the ban, covering all beaches and other bathing areas, will remain in place until next Wednesday.

Water quality sampling is due to take place at Seapoint, Sandycove, the Forty Foot, Killiney and White Rock. Testing in other areas closer to the city has already been carried out with results expected on Monday.

Dún Laoghaire-Rathdown Green Party councillor Ossian Smyth said he could not remember a single event ever leading to the closure of every beach on the south coast. “It must be absolutely massive [leakage] to knock out all of the beaches for seven days.”

In a statement on Thursday evening, Dún Laoghaire-Rathdown County Council said it envisaged a seven-day closure following a “sewerage wastewater overflow” at the Irish Water-operated Ringsend wastewater treatment plant during heavy rains on Tuesday and Wednesday.

The local authority, in consultation with the Health Service Executive (HSE), has placed temporary no-bathing notices in place at all of its designated public sites. The HSE has also said that aside from bathers, “any organisers of any coastline or water based leisure or sporting event” should take heed.

Similarly, Dublin City Council said no bathing signs were put in place for Dollymount, Merrion and Sandymount beaches but, as with the rest of the coastline, extend to all areas whether designated for bathing or not.

“The prohibition will be in place until a clear set of (test) results is obtained for the bathing waters,” it said.

Fingal County Council said waters along the north Dublin coast are not affected.

Irish Water, which runs the Ringsend treatment plant, said there was a storm water overflow due to adverse weather conditions earlier this week.

“The storm water overflow operated in compliance with regulations, and was fully screened and settled,” it said.

A spokeswoman for the Environmental Protection Agency (EPA), which licences the Ringsend facility, said it was made aware of the situation by Irish Water on Thursday. Its environmental enforcement officers will follow up the matter as is routine, she said.

In Dún Laoghaire, Cllr Smyth said the bathing ban was a major blow to users of the coastline which attracts large numbers during the summer months.

“I would say a lot of people went swimming today and didn’t know,” he said. “It’s huge because the coastline if one of our two major amenities in south Dublin; we have the mountains and we have the sea.

“Sea swimming has become massively popular. We would have 500 people at a time in Seapoint or at the Forty Foot on a busy day.”

An Bord Pleanála recently granted planning permission for an upgrade at Ringsend at a cost of more than €400 million.

The plant treats about 40 per cent of Ireland’s public wastewater but has been operating over capacity and has not been in compliance with national and EU environmental regulations for many years.

Incoming Green MEP Ciaran Cuffe, who had been a member of Dublin City Council, said the beach closures should give rise to greater clarity regarding how such incidents can be avoided in the future.

“I think it’s a cause of concern. Irish Water needs to give us a clear plan for when they will have infrastructure in place that can prevent this kind of incident,” he said.

“The hope with the setting up of Irish Water was that they could tackle the underlying deficit in waste water infrastructure.”