Greystones harbour blockade ‘toned down’ as sides agree to meet

Fishermen block the entrance Greystones harbour in a protest over access, trawler owners say they have been denied access to the harbour since it was redeveloped at a cost of €300 million. Video: Fotonic 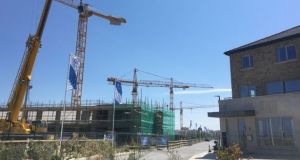 Part of the development near Greystones harbour. Photograph: Bryan O’Brien

A planned blockade of Greystones harbour in Co Wicklow, amid a row over access for local fishermen was “toned down” at the last minute after all sides agreed to a meeting.

While a flotilla of trawlers pulled back from the mouth of the harbour to allow sailing clubs and other seafarers in and out, several hundred people turned out to support the fishermen at the centre of the dispute.

One of those fishermen, Ivan Toole, skipper of the Golden Venture, who is the fifth generation of his family to fish the waters off his native Greystones, said they “toned down” the blockade after an assurance of a meeting next week to resolve the dispute.

“It wasn’t a full blockade. We anchored in the harbour and allowed room for others to pass, because late last night Cllr Tom Fortune managed to get everyone to agree to come to a meeting,” he said.

“That is what we were looking for, so we have already achieved part of what we wanted to achieve from the protest.”

The proposed meeting is to take place on Thursday at Greystones Municipal District Offices at 4pm.

Mr Toole said the fishermen will be seeking a written assurance that they will get the access and facilities they were assured of at the harbour, which is being redeveloped as a marine leisure and residential quarter.

The €300 million project took place under a public-private partnership between Wicklow County Council and the Sispar building consortium.

“We were told we’d have to leave the harbour for six months, when the redevelopment work started,” said Mr Toole.

“We decided this year we are coming back to the harbour, and we are going to bring this to a head, no matter how long it takes.”

Mr Toole, 42, who fishes crab and lobsters, has been operating out of Greystones since the age of 13. The row centres around nine fishermen on three boats, who have traditionally fished out of the Co Wicklow town, and who moved their boats to Dún Laoghaire in south Dublin during the stalled building works.

“I am hoping as a result of this meeting, the fishermen will be facilitated, and it will be agreed the way they are going to use the harbour, so they can park their boats and offload their catch, to send on to their customers – basically that they can earn their living,” he said.

Mr Fortune said the relaxing of the planned blockade in response was a “big gesture” by the fishermen and their supporters.

“If there wasn’t good faith, I don’t think the meeting would be happening,” he said.

“The fact everyone is prepared to meet and sit down at the table is a good indication of everyone’s intentions. I’m certainly hoping we will be coming out of the meeting with a resolution.”

James Kirwan, of BJ Marinas, declined to comment, and would not confirm or rule out attendance at Thursday’s meeting.