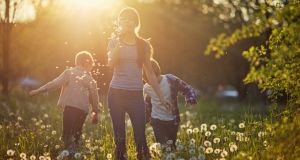 The pollen count is expected to increase with fine weather forecast in the coming days. Photograph: Getty Images

People suffering combined asthma and hay fever have been warned to safeguard against potential fatal attacks from this weekend with the pollen count expected to rise.

Ireland has the highest mortality rates from asthma in western Europe with 63 deaths in 2016.

According to the Asthma Society of Ireland (ASI), which issued the warning on Friday ahead of an anticipated arrival of fine weather, more than 300,000 people suffer from both asthma and hay fever together.

Research suggests that up to 80 per cent of people with asthma notice a worsening of symptoms due to allergies such as pollen, as their bodies trigger an allergic reaction. In these cases, asthma attacks can often prove fatal.

Those affected have now been urged to take measures to protect against rising pollen levels.

The ASI is now running a “pollen tracker” which on Friday showed high levels in the Leinster region but moderate status everywhere else.

It warns that with the arrival of peak grass pollen season, a high risk is expected during dry sunny days.

The ASI warning comes after indications of an impending European heat wave nicknamed the Saharan Outbreak.

This plume of hot air is expected to bring record temperatures to the continent which could reach as high as 27 degrees in Ireland next week.