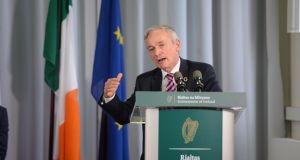 The Government is to hold “town hall” meetings throughout the country on its climate action plan in an effort to encourage communities to buy into its ambitious but difficult targets.

Minister for Climate Action Richard Bruton will host the first meeting in Cork on Friday, along with Tánaiste Simon Coveney.

The meetings are part of a concerted effort by the Government to begin work immediately on meeting the onerous targets on greenhouse emissions reductions set for 2030 and 2050.

The number of electric vehicles (EVs) in Ireland, now in the low thousands, would need to increase by an average of 100,000 annually over the next decade to reach the plan’s target of almost one million EVs by 2030.

Similarly, some 50,000 homes will need to undergo deep retrofits each year to meet the the plan’s targets.

The plan also includes a ban on oil-fired boilers in new homes from 2022, and for gas boilers by 2025; and the phasing out of coal and peat-fired electricity generation, among 180 other measures.

“Every generation wants to leave the world in a better place than they found it for their children,” Mr Bruton said. “We have a short window of opportunity to act. We must act now and leave a better, healthier, more sustainable Ireland for future generations. This plan provides our way forward.”

Mr Bruton has said he will set out his approach to climate action at the Cork meeting and will also be receptive to views and opinions from those in attendance.

“The farming community of rural Cork have also experienced fodder shortages as a result of further extreme weather conditions of drought and heavy snow in recent years.”

One of the major actions for agriculture is a commitment to plant 8,000 hectares (19,768 acres) of new forest each year. However, the report acknowledges the lack of enthusiasm among the farming community for forestry. A key part of the plan will be to persuade farmers to designate some of their holdings for tree-planting in the future.

Mr Coveney said that as Minister for Foreign Affairs he wanted to make sure that responding to climate change was at the heart of the State’s development aid programme across the world.

He said Ireland wanted to help those most impacted by climate change and assist vulnerable small islands.