People Before Profit TD says the Government is continuing to issue exploration licences, build runways and construct a gas terminal 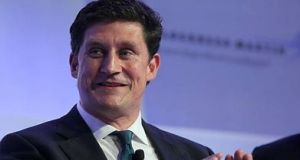 Minister for Climate Action Richard Bruton has rejected claims by the Green Party and People Before Profit that measures on public transport in the Government’s new climate action plan are “woeful”.

Speaking before the Oireachtas Committee on Climate Action on Wednesday, Mr Bruton also said a proposal to have 1 million electric vehicles in place by 2030 was achievable. He said these vehicles would lead to a better environment as well as an 80 per cent reduction in costs when compared to running a petrol car.

Mr Bruton said when making a modal shift in transport the return in the form of reduced emissions “is surprising low”, but that electric vehicles provided an opportunity to meet emission reduction targets in a relatively short period.

He said there would be massive changes in public transport, fuel use “and strategies to make travel more aligned to compact living”.

People Before Profit TD Bríd Smith said that while the intention to phase out fossil fuels was welcome, the reality was that the Government was continuing to issue exploration licences, build runways and constructing a gas terminal.

She said there was no attempt to place greater demands on big corporations and agrifood industry, and instead there was “too much onus on individuals”.

Ms Smith cited the case of Green Party European elections candidate Saoirse McHugh, who was living in a 200-year-old house on Achill Island with public transport in the form of a single bus service daily.

She said this was an impossible situation for someone seeking to decarbonise, and that the vast majority of “middle Ireland” could not afford to retrofit their homes or buy an electric vehicle.

He questioned, however, if it was ambitious enough as it envisaged cutting carbon emissions by 2 per cent a year up to 2030, but a figure of at least 7 per cent a year would be required after that.

Mr Ryan said the transport elements were “woeful, lacking ambition in seeking real efficiency and long-term decarbonisation”, while over concentrating on electric vehicles and continued road-building.

“What the Department of Transport is overseeing at present is incompatible with 2050 ambition,” he said, adding that it would lead to gridlock and increased social and environmental costs. “It has to be recast because this doesn’t deliver. There is mention of a daft car scrappage scheme and a hint of congestion changes – nothing else.”

Fianna Fáil spokesman on climate action Timmy Dooley said the plan was clear on what was needed to be done to reach key targets, but “relatively light on how we are going to do that” and also on cost issues.

Mr Bruton replied that “about 75 per cent of the measures pay for themselves”. Detailed planning was under way, for example in scaling up the capacity of the electricity grid to take more renewable energy.

He accepted, however, that old approaches might not deliver the scale of action required. This was clear with retrofitting houses, where smarter procurement, easier repayment options and an aggregated system of working on a lot of buildings at once was necessary.