Candidate with ‘questionably racist language’ would not meet with stringent checks 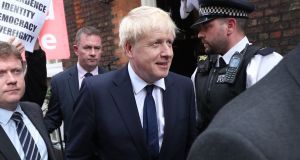 Boris Johnson’s candidacy for the next UK prime minister was ‘rather disappointing’. Photograph: Yui Mok/PA Wire

The chairman of AIB has said he would reject a job application from a candidate like Boris Johnson if he wanted to become a director of the Irish bank.

In strongly worded remarks at the MacGill summer school in Glenties, Co Donegal, Mr Pym said a candidate who uses “questionably racist language” and has a history of being “economical with the truth” would not meet with the stringent honesty and probity checks employed by the bank when interviewing new directors.

Mr Pym sketched a scenario where a candidate like Mr Johnson were applying to be a director of AIB, a candidate “with a mop of uncombed hair who had been dismissed from two previous positions in his career for, shall we say, being economical with the truth.”

The banker, who is known for his outspoken remarks in public speech, emphasised that he was speaking in a personal capacity.

“If on interview the candidate’s answers were evasive, very peculiar, deflecting in Latin vernacular, and spattered with questionably racist language. A candidate who appeared to care about nothing bar himself, and to be flashing both non-matching socks and glimpses of a possible temper. I think it would be a very easy decision to reject that application, one of the easier decisions, notwithstanding the charisma they showed in interview,” Mr Pym said.

“You know who I’m talking about, because it doesn’t really surprise me that Alexander Boris de Pfeffel Johnson is a perfectly viable candidate to be prime minister of the United Kingdom. It’s just rather disappointing,” he said.

Invoking Mr Johnson’s remark that the backstop and Ireland was akin to the tail wagging the dog, Mr Pym warned that “if you mess with an animal’s tail, you risk ending up with a dump of sh*t on your own feet”.

The AIB chairman bemoaned the fact that the contest for the leadership of the Conservative Party, and hence the keys to 10 Downing Street is again “between two white graduates of Oxford University. They will be chosen by members of the Conservative and Unionist party, typically: white, male, 70. People for whom Boris flourishing the sounds of Kipling, Woodhouse and the Beano echoes to the language of their childhood, when all was of course well with the world.”

He said that the United Kingdom is undergoing a “complete meltdown”, arguing that the European Union will be relatively unscathed by Brexit. “It is obviously bad news, but it isn’t terminal, and the sooner the Union moves on from it the better”. He said that British politicians were mistaken if they believed that Europe was bluffing “and will cave in when confronted by the British bulldog.”

“This is a dangerous fallacy, the EU is massive, it’s like an elephant looking down on some irritating yapping dog”. He said a no deal Brexit was a possible outcome, and emphasised that the consequences for Ireland were more serious than those faced by the European bloc as a whole.

He said, however, that clarity was in short supply, and “therefore preparing for the worst is essential”. Mr Pym also suggested that the UK will face “a real financing problem” after Brexit, and could be heading for a “good old fashioned sterling crisis”. He said that the EU is a peace project, which “preserves peace in Europe and is a barrier to Putin”.

Douglas Carswell, a former Conservative and Ukip MP, told the conference that the “Fintan O’Toole” school of Brexit analysis, employed by The Irish Times and RTE, does a “grave disservice” to Ireland. “It sees euroskepticisim as an atavistic English eccentricity, a hangup from the age of Empire… at best something to be mocked, and worst something to be pitied.”

He said such arguments were “comfort blanket thinking”, which fails “to recognise that far from emanating from english ecc, perhaps it’s something that comes from flaws within the European project itself” and encourages people to clutch at straws. He said Brussels loathed the idea of Brexit because the UK will “leave and it will flourish”.

Speaking on the same panel, Bobby McDonagh, the former Irish ambassador to London, told the summer school that he believed the UK could rejoin the EU in a generation, but he criticised the “infantile nature” of much in current British public debate, where “assertive horsesh*t is as valued as rational thought”.

He criticised the “preposterous fiction that the snake oil flogged by [NIGEL]Farage to Joe Public was what Joe Public wanted all along”, adding that Britain had become a “less confident nation” than when it organised the olympics in 2012. Some of the impetus for Brexit, he said, was born of a “supreme lack of confidence in Britain’s ability to hold its own in today’s world of multilateral negotiation and compromise”.

Dr Mary C. Murphy, who is Jean Monnet professor of European Integration at UCC, said that Brexit had led to a “poisoning of the political narrative in the UK” and an “acceptance of mistruths” which could lay the groundwork for accepting radical political change.

“Brexit has already split British society and has wounded elements of the UK polity,” she said, adding that “the survival of the polity in its current form cannot be taken for granted.”