Boris Johnson is the next British prime minister. So what happens now?

Will Boris the prime minister strike a different note from Boris the candidate?

Boris Johnson has been officially elected as leader of the UK Conservative Party. In his acceptance speech Johnson vowed to deliver Brexit as the new British prime minister. 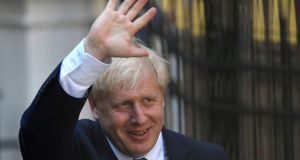 If Boris Johnson continues with the campaign rhetoric, we will be on course for a no-deal. Photograph: EPA/Neil Hall

So now Dublin plays the waiting game to see if Boris the prime minister strikes a different note from Boris the candidate.

During the Tory leadership campaign, Johnson repeatedly demanded that the backstop be abandoned and the withdrawal agreement – the only way the UK leaves the EU with a deal – be rewritten accordingly.

As public and private signals from Brussels and Dublin have made abundantly clear, that is out of the question for the EU. So if Johnson continues with the campaign rhetoric, we will be on course for a no-deal – the two sides not just apart, but miles away from one another, and no compromise possible.

If that happens, the focus will shift to Westminster, where anti no-deal MPs, including many in his own party, have pledged to use their strength in parliament to block a crash-out exit at the end of October. Johnson has only a wafer thin majority when he counts all of the MPs in his party as supporters – which, on this issue, he cannot.

It is not certain that MPs can strong-arm the government into taking action that will avoid a no-deal in the House of Commons. And remember, a no-deal is the default position; if nothing else happens, the UK leaves without a deal on October 31st.

But there is always the nuclear button of a no-confidence motion – and some Government sources in Dublin, citing contacts in London, believe Tory rebels will destroy Johnson’s government before acquiescing in a no-deal. So if Johnson strikes a course for no deal, it will be a long hot September. Dublin and Brussels will stand by; the action will be at Westminster.

The other possibility is that Johnson will pivot and seek an accommodation to which the EU could possibly agree. What sort of tweak to the withdrawal agreement that would be has not been worked out yet, and some sources in Dublin are deeply sceptical that it is possible. But others believe it is so clearly in Johnson’s interests to leave with a deal that he will at least try to reach a compromise with the EU.

The new prime minister’s early comments and speeches will be parsed carefully, as will the composition of his cabinet, for signs about which direction he will choose.

There is a further, related consideration that Dublin will be watching closely in the coming days. Rumours at the weekend in the UK press suggested that Johnson was considering making Michael Gove his Secretary of State for Northern Ireland. If he does this, it will cause significant concern in Dublin about the direction of Johnson’s policy towards the North.

Gove opposed the Good Friday Agreement, and continued to condemn it as a shabby moral compromise with a terrorist organisation long after it had bedded down.

With the prospect of direct rule from Westminster for London as a consequence of a no-deal Brexit, Gove’s appointment to Hillsborough Castle would suggest to the Irish Government that the Conservative alliance with the DUP will go beyond the requirements of parliamentary exigencies.

However, some Irish officials suspect the leak was mischievous, intended to put Gove – who famously betrayed Johnson during the 2016 leadership election, but has lately declared his loyalty – on the back foot. The Northern Ireland job is considered by most British cabinet aspirants as one to be avoided.

Johnson did not share Gove’s anti-agreement views – in fact he supported it at a time when his newspaper, The Daily Telegraph, was strongly opposed – but there is little evidence of substantial interest in the North on his part. His approach to the North is certain to be shaped by Brexit. As long as he relies on DUP support at Westminster, little change is likely. He may even reappoint Karen Bradley as Northern Secretary, some rumours suggest.

Senior sources anticipate a phone call between Taoiseach Leo Varadkar and Johnson soon after he becomes prime minister. Though no real talking will be done until the two men meet and, despite speculation that this could take place in the first few days of Johnson’s premiership, no arrangements have been made. Varadkar has sought to cultivate relationships with other EU leaders, but Johnson will be a whole different ball game. Still, it could hardly be worse than his frosty personal relations with Theresa May. Could it?