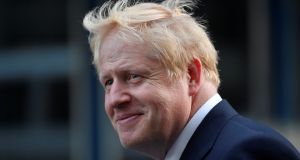 Boris Johnson is due to become the British prime minister on Wednesday afternoon after Theresa May submits her resignation to Queen Elizabeth. Photograph: Reuters/Toby Melville

Taoiseach Leo Varadkar congratulated Boris Johnson in a tweet issued shortly after his election as Conservative Party leader was announced on Tuesday, and said he looked forward to an “early engagement” on Brexit, Northern Ireland and bilateral relations.

However, senior Irish and British sources played down the prospect of a meeting this week, with Mr Johnson expected to be occupied with selection of ministers, key staff and advisers in the coming days.

However, a phone call between the two leaders on Wednesday or Thursday is expected. Mr Johnson is due to become prime minister on Wednesday afternoon after Theresa May submits her resignation to Queen Elizabeth.

Tánaiste Simon Coveney also congratulated Mr Johnson, pledging to “work constructively with him and his government to maintain and strengthen British-Irish relations through the challenges of Brexit”.

Mr Johnson has said the backstop, the insurance policy which guarantees no hard border on the island of Ireland, must be removed from the withdrawal agreement to secure a new deal, or the UK will exit without an agreement on October 31st. However, there is scepticism in Dublin and Brussels as to whether Mr Johnson could get a no-deal through the British parliament.

Government sources said they would wait and see what approach the new prime minister took on Brexit, but Ministers stuck to the line that there would be no changes to the backstop.

Labour leader Brendan Howlin warned that Mr Johnson’s new government “apply maximum pressure on Ireland to make a concession, and some EU leaders may panic at the prospect of the UK leaving without a deal. However, no country will be as negatively affected as Ireland, and the Government must hold firm on the backstop to protect our long-term interests even if the short-term impact is a major negative shock to the economy,” he said.

“If Ireland reduces our resolve to maintain an open border, that would seriously weaken our negotiating position. If the Taoiseach compromises on the Border now, that could reinforce division on this island for generations to come. But even if some checks are imposed temporarily, our national aim of having an open border can be preserved at EU level as the only acceptable long-term outcome,” Mr Howlin said.

In pointed remarks delivered at the MacGill Summer School in Glenties, Co Donegal, Mr Martin suggested Mr Johnson had failed to impress Irish officials and politicians in his most recent cabinet posting.

“Anyone in Dublin who met [Mr Johnson] during his time as foreign secretary will tell you the many ways in which he failed to show the slightest level of understanding about the operations of the Good Friday Agreement or the deep problems raised by Brexit.”

“It is clear that he is single-minded in his ambition, but I don’t think anyone can credibly say that he has thought through how to promote prosperity and reconciliation in Northern Ireland.”