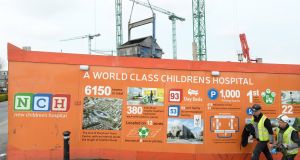 The top civil servant in the Department of Public Expenditure and Reform will on Wednesday signal a shake-up of how the State spends money on infrastructure “mega projects” in the wake of the controversy over the national children’s hospital.

Robert Watt, the secretary general at the department, will acknowledge that the State has a problem delivering “bespoke projects” and mega projects, which are classed as those costing more than €1 billion.

He will outline a series of reforms which the Government will introduce in the autumn designed to strengthen its hand in delivering the projects.

He will defend the Government’s record on smaller capital delivery, such as schools and Garda stations, in a speech at the MacGill Summer School in Co Donegal on Wednesday. But he will acknowledge that reforms are needed.

Going forward, the Government will only give a commitment to building a project based on final costings and detailed tender documents being completed, it is understood. Two-stage procurement processes, when run in the same manner as the process which drove overspend at the national children’s hospital project, will not be used again. There will be more assurance processes introduced into the system and the Government will be more forceful with contractors, Mr Watt will say.

Minister for Finance Paschal Donohoe will bring more proposals to Cabinet on how the Government can achieve better outcomes on large infrastructure projects to Cabinet in September, it is understood.

Mr Watt will also challenge the construction sector to keep its costs under control and secure productivity improvements, which has been flat in recent years.

While Mr Watt will not specifically mention the National Broadband Plan (NBP), he has also been vocal in his criticism of that plan.

In a memo on the NBP released by his department, officials said they could not support the rural broadband rollout. It also said the capital funding for the NBP would require “the cancellation or delay of a wide range of planned investments across other priority areas of Government investment, such as social housing, education, health and climate action”.

The Government’s failure to keep large projects under budget has been flagged by the Irish Fiscal Advisory Council (IFAC) as a risk to the wider goals of the National Development Plan, which aims to deliver a range of smaller projects to improve transport, housing and energy sectors.

Earlier this year, the IFAC warned that if spending overruns similar to those seen on the national children’s hospital and the NBP are replicated across other large projects, the budget for other projects to be supported by the National Development Plan would fall from €11.6 billion to just €9.7 billion annually.

An inability to constrain budgets also creates a cycle where the market believes overspending will be tolerated, the watchdog warned.

“This creates future problems by reinforcing the belief that upward revisions to the ceiling are very likely to be facilitated, hence weakening spending controls further. The interaction between unrealistic forecasts and a subsequent relaxation of ceilings can put the public finances at risk.”