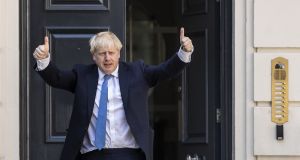 In pointed remarks delivered at the MacGill summer school in Glenties, Co Donegal, Mr Martin suggested Mr Johnson had failed to impress Irish officials and politicians in his most recent cabinet posting.

“Anyone in Dublin who met (Mr Johnson) during his time as foreign secretary will tell you the many ways in which he failed to show the slightest level of understanding about the operations of the Good Friday Agreement or the deep problems raised by Brexit. ”

Mr Martin raised doubts about the conservative leader’s knowledge of Northern Irish issues. “It is clear that he is single minded in his ambition, but I don’t think anyone can credibly say that he has thought through how to promote prosperity and reconciliation in Northern Ireland.”

He also said that “nobody really seems to know what his beliefs are in relation to Brexit other than wanting to raise the flag of victory at Halloween… three months ago he voted for the Withdrawal Agreement. Now he says it must be buried forever.”

Speaking to reporters in Glenties before the event, Mr Martin said that when he met Mr Johnson last year “there was a sense that he was glossing over the realities of the potential negative of Brexit on the Good Friday Agreement… he seemed to push them to one side as if they weren’t an issue.”

“I think he needs to bring himself up-to-date very quickly in terms of what is required actually to sustain the sets of relationships on this island,” he said. Mr Martin also expressed the hope the new prime minister would moderate his position on Brexit once in office.

“There is no percentage in it for the UK in terms of a no-deal Brexit, or indeed for anybody, and that his own self interest and the interests of his party and government will be bound up in arriving at a common sense appraisal of the challenge that Brexit presents to him”.

Mr Martin was speaking on a panel at the summer school on the form of a “new and agreed Ireland”. He had been due to share the stage with the DUP’s Sir Jeffrey Donaldson MP, and Sinn Fein’s leader in Northern Ireland Michelle O’Neill. However, both were unable to attend the event, with Mr Martin criticising Ms O’Neill’s failure to appear for what he said was the second year in a row.

“This is the second year in a row that I was billed, and I was to be sharing a platform with Michelle O’Neill and for some reason, the Northern Ireland Sinn Fein leader is pulled again and these are issues id like to discuss and engage on on a public platform and that is disappointing.”

Mr Martin also raised concerns about the political situation in Northern Ireland, where the devolved Stormont Assembly has not sat since January 2017. He warned of a “growing gap between the reality of Northern Irish society and political debate, a partisan politics which has returned to emphasising getting one over on the other side and the collapse of constructive relations between the Irish and British governments”.