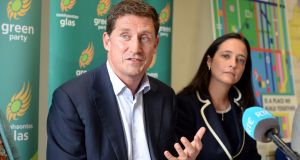 Green Party leader Eamon Ryan with Catherine Martin TD: “One of the reasons why Ireland is now ranking so low in international climate action league tables is because we are seen in Europe as one of the countries which is trying to block new clean energy solutions,” he said. Photograph: Eric Luke

Environmental groups and the Green Party have accused the Government of refusing to back EU proposals to allow community groups and householders to generate and sell renewable energy back to the electricity grid.

The Minister for Climate Action and Environment, Denis Naughten, has emphatically rejected their contention that Ireland is not supporting major reforms on renewable energy policy.

Documents indicating Irish officials are opposing some of the changes proposed by the European Commission to the renewable energy directive (Red) were released in Brussels. Community “microgeneration” of electricity is seen as an important element of strategies to reduce CO2 emissions, and to facilitate change to behaviour in tackling global warming.

Green Party leader Eamon Ryan said: “One of the reasons why Ireland is now ranking so low in international climate action league tables is because we are seen in Europe as one of the countries which is trying to block new clean energy solutions.”

Irish amendments show “how negative we have become, constantly looking to reduce targets [to reduce carbon emissions] and weaken any measures which would compel countries into action”, Mr Ryan said.

“The Government is arguing for the removal of a clause which would compel countries to allow householders sell their power back to the grid using ‘at least’ the wholesale price of electricity. The Citizens’ Assembly called for just such a provision but the Government is ignoring their advice,” Mr Ryan said.

The Government, he said, was looking to remove a provision that would require countries to favour community ownership of energy in new renewable support schemes – as happens in member states strongly adopting renewable energy.

“Minister Denis Naughten publicly supports these measures, but when it comes down to reality, his department is working in Brussels to undermine this new ownership model.”

The Irish amendments will be discussed at a meeting of senior officials in Brussels on Friday, before going to the next European Council meeting for decision on December 18th.

Friends of the Earth Ireland director Oisín Coghlan said in a letter to Mr Naughten this week that his organisation had welcomed a focus on increased community ownership in the national mitigation plan and the draft renewable electricity support scheme (RESS) – although microgeneration was being considered separately.

“We were genuinely taken aback, therefore, that Ireland has taken a remarkably negative approach to community energy in the Red negotiations,” he added.

A Department of Climate Action and Environment spokesman rejected the claims that Ireland was dragging its feet on its commitments to supporting micro-generation.

“The key message is that the Minister and department are on message and supportive of the renewables directive. The points that we have raised in working groups relate to technical drafting and not some recalcitrant position on the objective of the directive,” he added.

The department was progressing actions to provide market support for microgeneration and to develop a new RESS. In the ongoing negotiations Ireland has been supportive of provisions around “renewable energy communities” and “renewable self-consumers” as they broadly align with policy being developed in Ireland, he said.

Like other member states and the commission, “we are working in the relevant groups to have language that meets our ambition, but which is also clear and workable”. In relation to the two issues raised, Ireland’s position has been that member states must have maximum flexibility in designing their national support schemes, which are in line with the principles of subsidiarity and ensuring that unworkable obligations are not “hard-wired” into a directive, he said.

Removal of “at least” from the text was due to the lack of clarity – Ireland, like other member states, sought clarification on this.

“We want to retain control over what type of supports we introduce and not have something ambiguous left in the text. We have consistently reaffirmed our support for renewable self-consumers,” he added. Their approach has been to improve the text where relevant and to ensure all consumers must contribute in a balanced and adequate way, and that “self-consumption of renewable energy” should not impose undue costs on others.

“Everyone has to be mindful that increasing renewable penetration will drive increased charges for networks and system services. As a number of these charges are fixed costs on consumer bills, they therefore tend to impact hardest on domestic consumers in fuel poverty,” the department noted.

The RESS was being designed to assist Ireland in meeting its renewable energy contribution to EU-wide targets out to 2030, the spokesman said. A cornerstone of the new scheme would be the provision of pathways for increased community ownership, participation in and benefit from renewable electricity projects. The approach to microgeneration was in line with experience in other EU member states who have attempted to introduce supports for micro generation.

Mr Naughten was committed to further exploring opportunities for supporting micro generation, as he believed it could have an important role in Ireland’s transition to a carbon-free economy, in assisting Ireland meet its renewable electricity targets, and increasing social acceptance of renewable energy projects.

The most effective policies to increase community ownership and participation in renewable electricity projects have been assessed and examined within an Irish context, the spokesman added.

Representatives of Stop Climate Chaos and the Environmental Pillar, who are due to meet Mr Naughten next week, said they would be raising the Red reforms, and asking Mr Naughten how he “intends to align Ireland’s position in the EU negotiations with his stated national policy and positions”.

One in five young people have experienced abuse by partner, study finds 13:52
December sky: Jupiter and Saturn to appear closest to each other since 400 years ago 13:52
Boris Johnson confirms Santa is ‘ready and raring to go’ 13:42
Recipients of PUP to get Christmas bonus on December 8th 13:36
Woman threw TV off balcony injuring person walking below, court told 13:26