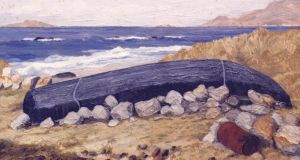 When, how and where to launch a boat, or keep it safe from storms, was central to already difficult lives on Ireland’s western coast. Illustration: Michael Viney

A singular misjudgment of our middle-aged plan for a self-sufficient life was to suppose that commissioning a currach would let us go fishing from the untamed, pier-less shore of Thallabawn, Co Mayo.

The “canoe” delivered to our gate, glossily black and beautiful, attracted some attention. Old men offered memories of fishing they had done before a storm smashed the boat or their hands seized up. They warned me not to try fishing on my own, like the man who had raised a family in our small house.

We had speculated, from somewhat romantic paintings and ancient photographs, that the two of us, perhaps with a neighbour to share the catch, could readily march the canoe on our backs from the shore to the edge of the waves.

The boat, of Inishturk design, was robustly lined with timber laths, adding further to its weight. On the first – indeed the only – trial of traditional, turtle-like porterage down the strand, two burly farmers were stooping behind me. On my slow and stumbling advance I felt, indeed, like a turtle – the one that, in ancient Chinese myth, supports the intolerable weight of the planet.

The only prospect of shelter for the currach was a niche in the far rocks, a slim wedge of sand beyond the headland. A tractor fork-lifted it there, together with blocks to build a locker for engine and trammel net. Later came a launching cradle and a venerable small winch from somewhere in Dublin’s dockland. The cost of a self-sufficient pollack was climbing rather high.

A further singular folly was to suppose that, on enough calm days, a couple of friendly neighbours would be glad to join me in a fishing expedition. But on any fine day, in actuality, they had their urgent priorities: footing turf, shearing sheep, fixing the roof. Any fine Sunday was promised to “the match”.

I had my own workaholic tasks, building windbreaks, planting hedges, mucking out goats, hens and ducks, and growing food for three. Five years passed, none especially rich in fine days.

There were one or two sorties in the currach, none fruitful; our subsequent setting of an intertidal, longline spillet caught far more fish at less effort. I tarred the boat’s canvas yet again before we sold it, for enough to build a greenhouse. And somebody lifted the winch, a quite valuable chunk of bronze.

This salutary, if essentially, trivial saga was prompted by a new book from a retired professor of NUI Galway, Dr Noel Wilkins,

Humble Works for Humble People: A History of the Fishery Piers of County Galway and North Clare (Irish Academic Press, €30) deals with harsh coastal realities in the century of currach, naomhóg, pucán and gleoiteog. When, how and where to launch a boat, or keep it safe from storms, was central to already difficult lives.

The book took years of documentary research and “personal perambulation” to seek out the piers, or their ruins, at the end of countless boreens. Wilkins found that “the exact number of piers, quays and landing places is fractal; the closer we look, the more individual structures, often of differing dates, we can identify, even at a single site”.

Between Black Head in Co Clare and Killary Harbour at the north of Connemara, some 320 man-made piers and quays were erected after around 1800, averaging one for every two to three kilometres of coast. The professor reached more than 250 of them, found most densely along the convoluted inlets of south Connemara.

Built overtly to serve a government drive for fishery improvement, almost all the piers in Co Galway built in the famine-struck 1800s were actually relief works in aid of the destitute and starving. “Memorials” appealing for help with construction money were snared in factional bureaucracies, and the final siting of the piers might show little real thought for wind and tide.

An old harbour at Ros Muc, empty of water at low tide and strung with seaweed, provided a fine photographer, Walter Pfeiffer, with a typically rich image.

It is one of some 150 of Pfeiffer’s pictures presented superbly in large format in Connemara & Aran, along with poems by Moya Cannon, Eamon Grennan, Mary O’Malley and others. Artisan House, the Connemara publisher, offers a paperback at €28 and a hardback at €100 that includes a CD of the poets reading their work.

Walter Pfeiffer died last spring, before the book was published. He settled in Ireland from Germany in his 20s and his youthful work is still widely known from timeless posters such as Doorways of Ireland.

For this, his last book, he wrote: “Dark grey skies, rain and storms were my challenge [as] the only person in a landscape of abandonment . . . My Connemara and Aran are not grey; they are supremely light-filled, recklessly hued and splendidly untamed.”