Trump administration spokeswoman says plan has not been finalised amid backlash 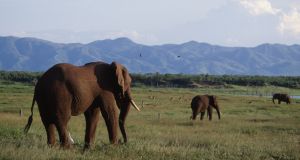 Elephants at Lake Kariba, Zimbabwe: Annual hunting revenue this year in Zimbabwe could be as much as €110m, mainly from the US market. Photograph: DeAgostini/Getty Images

The White House on Thursday said it had not yet finalised a decision to allow trophy hunters who kill elephants in two African countries to bring the remains of the endangered animals home as trophies, a plan that had outraged US conservation groups.

The planned move, disclosed this week by the US Fish and Wildlife Service (USFWS), had triggered protests from conservation groups and a frenzy on social media.

Opponents posted pictures on Twitter of US president Donald Trump’s sons Donald jnr and Eric, who are avid hunters, posing with the cut-off tail of a slain elephant and other dead wild animals.

“There hasn’t been an announcement that’s been finalised on this front,” White House spokeswoman Sarah Sanders told reporters when asked about the reported policy shift on Thursday. “Until that’s done I wouldn’t consider anything final.”

The plans would allow imports of elephant trophies from Zimbabwe and Zambia into the US – a move campaigners fear could damage global momentum on ending the ivory trade.

In 2014, US big game hunters killing elephants in Zimbabwe were banned from bringing their trophies home, on the basis that the country had failed to show that it was taking elephant management seriously.

The decision by the USFWS to reverse that ban follows moves in favour of the US hunting sector that are worrying some observers.

Last week US interior secretary Ryan Zinke, a hunter himself and a keen supporter of hunting policies, established an International Wildlife Conservation Council. It has a clear focus, the African Wildlife Foundation has pointed out, “on promoting the hunting industry, not conservation”.

Hunting elephants is legal under strict permit systems in several African countries, and the revenue is crucial, some argue, for supporting conservation efforts. The large fees that trophy hunters pay in order to be allowed to shoot elephants, lions and leopards can be a significant source of revenue.

In Zimbabwe, according to the Safari Operators Association, annual hunting revenue this year could be as much as $130 million (€110 million), mainly from the US market.

But there has been an international backlash against the practice. A huge outcry overthe shooting of Cecil the lion by Walter Palmer in 2015 led to calls for the dentist to be jailed, and trophy hunters are now regularly named and shamed by campaign groups. A petition to ban trophy hunting currently has 146,000 signatures.

Ivory poaching has led to a catastrophic drop in elephant populations around the world over the last 15 years.

“The US government has been a global leader in the fight to reverse the dangerous declines among Africa’s most iconic species such as elephant, rhino, and lion. It is unfortunate that the Trump administration is willing to sacrifice that leadership position,” said Jeff Chrisfield, African Wildlife Foundation’s chief operating officer.

“Well-managed hunting can play a role in conservation. However, US policy on wildlife conservation should be informed by science, not by professional hunters and the gun lobby.”

“How someone could want to shoot such an intelligent, empathetic animal as an elephant is beyond me,” said Frank Pope, chief executive of Save the Elephants. “But what is most concerning for elephants is that renewed imports of trophy ivory into the US might undermine the all-important ivory trade bans put in place by America and China.

“China continues to show strong leadership and will close all ivory trade within her borders by the end of the year. Up to now American actions on elephants and ivory have been admirable. The fire of the ivory trade seems to be dying. The last thing we need is a sudden blast of oxygen from a misguided policy change.”