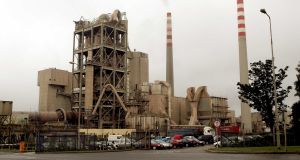 Irish Cement’s plans to increase the amount of alternative fuels it uses at its Platin cement works in Co Meath is not a move to develop a waste incinerator, the company has told a planning inquiry.

Irish Cement, which has been using up to 120,000 tons of residual waste including textiles, plastics and wastepaper to fire its kilns at the cement works, is seeking permission to increase the volume of waste to up to 600,000 tons.

But the company, part of the conglomerate CRH, told a Bord Pleanála hearing in Co Meath on Tuesday that the plan was to replace fossil fuels and reduce its carbon emissions, not to create a municipal waste incinerator.

An Irish Cement scientist, Brian Gilmore, told the hearing the plant had permission to manufacture 2.8 million tons of cement every year using imported fossil fuels and up to 120,000 tons of high-grade waste.

The new proposal was to allow the business to replace up to 85 per cent of its fossil fuels with suitable alternative fuels. The alternative fuels needed to be manufactured from residual waste and it was not simply a process of taking in residual municipal waste. He said the plant was only allowed to use fuel – either fossil or alternative – in the manufacture of cement.

Mr Gilmore said Irish Cement wanted to move to a more sustainable footing following trends in Europe where more then 200 cement plants used alternative fuels known as solid recovered fuel (SRF). SRF plants in Europe also used dewatered sewage to fire their plants, but this had not happened in Ireland as yet.

Existing use of 120,000 tons of SRF at Platin has contributed to making Irish Cement products more competitive abroad, securing the jobs of 140 workers in Co Meath and reducing the State’s output of carbon emissions.

Mr Gilmore said cement kilns at Platin had to run at a minimum of 1,450 degrees centigrade, at which temperature harmful dioxins and furans were destroyed. The kilns did not produce residual ash as the minerals present were required in the manufacturing process, he said.

He said whatever fuel the plant used, it would continue to make cement.

However, local TD and Minister of State Helen McEntee raised a number of concerns about traffic at the cement works and asked that measures be put in place to involve the public in ongoing consultation.

Local TD Thomas Byrne said he believed the public consultation so far undertaken by the company was not sufficient to involve all those who might be affected.

Mr Byrne said, “Irish Cement will probably say they met every requirement they are supposed to” but he believed there were people in east Co Meath “over which the smoke and the emissions will come” who were not aware of the plans. He also said he was concerned about the traffic levels and any future plan to bring in sewage sludge “because of the smell”.