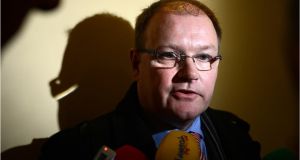 Tom Geraghty, PSEU general secretary, said a formal announcement about the creation of the new union would be made on Monday. Photograph: Dara Mac Dónaill

Early results from ballots on a merger between three trade unions suggest the proposal will be accepted.

Members in Impact, the Public Service Executive Union (PSEU), and the Civil Public and Services Union (CPSU) are voting on a proposed merger to form a new trade union, called Fórsa.

Results announced on Friday evening from both the PSEU and the CPSU were both in favour of amalgamation.

Impact trade union were still counting member’s ballots on Friday evening but it is understood the votes are strongly in favour of adopting the proposal to form a new union.

CPSU members voted by more than a three quarters majority in favour of amalgamation, with 4,479 out of 5,852 ballots in support of the proposal.

Some 1,371 members, more than 20 per cent, voted to reject the proposed merger. In total, 59 per cent of union members balloted on the issue.

In a statement on Friday evening CPSU general secretary Eoin Ronayne said “Impact is currently still counting its ballots which are reported to be strongly in favour”.

Members of the PSEU also voted in support of the union merger.

Some 3,800, 70 per cent, of members who voted supported the proposal. In total just over half of registered members voted in the poll, with 5,444 members completing ballots.

Under a third of members voted to reject the proposal, with 1,644 ballots opposing the amalgamation.

Tom Geraghty, PSEU general secretary, said “a formal announcement of all three results will be made on Monday morning, but at this point we are clear that it will be an announcement of the formation of a new union.”

“This is a positive outcome for public servants, the Irish trade union movement and for our society in general” Mr Geraghty said in a statement on Friday evening.

All three unions began counting ballots from noon on Friday. The new union would have over 80,000 members, which would make it one of the largest trade unions in Ireland. The vote on the amalgamation follows more than three years of discussions between the three unions.

Fórsa, the chosen name of the new union, comes from an Irish word meaning force or leverage.

The new union would represent members from the public and civil service, semi-state bodies, community and voluntary organisations, and some private sector employees.