There is a ‘status yellow rainfall warning’ in operation in Munster and Leinster with flooding and severe traffic disruption resulting from heavy overnight rainfall. 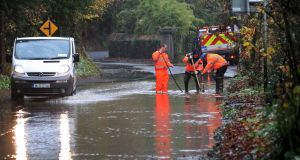 Two housing estates in Mountmellick, Co Laois were evacuated on Wednesday when the Owenass River burst its banks due to heavy rain resulting in flooded local access roads.

Dozens of families have been evacuated from their homes in Co Laois. The council’s director of services Kieran Kehoe said it was a “very unusual event” in the area where three rivers converge. here was an extreme rain event in the Slieve Blooms Mountains, where the River Barrow and two other rivers the Owenass and the Blackwater rise, he told RTE News.

“It’s a shocking situation here in the town. I never saw anything like it before,” local Fianna Fáil councillor Paddy Bracken told RTE.

There was widespread rain and flash flooding in many parts of the country with a yellow status weather warning in place until 9pm.

In Dublin gardai advised motorists to avoid the busy M4/N4 as two lanes on the Chapelizod bypass outwards are blocked by flooding. In addition, a lane is blocked outwards on the M4 near Maynooth at Junction 4. The M3 was closed from Clonee Junction 4 inbound.

The heaviest rain fell in the Dublin region with 41mms of rain (an inch and a half) from midnight to midday .

Dublin Fire Brigade said it had been called out to a number of incidences of flooding. The Clontarf Road and Infirmary Road was closed for a time. Flooding was also reported on James Larkin Road, Rock Road and Beresford Place.

Heavy flooding in the left lane of the M4 Dublin/Sligo Rd westbound at J7 Maynooth caused traffic tailbacks in the area. A section of the old N7 between Naas and Newbridge has also been closed because of flooding.

Teams assisting with the evacuation of people from their homes due to flooding in Mountmellick at the moment. pic.twitter.com/fw3AT4hdFN

Elsewhere in Kildare several roads in the county were impassable and Dara Park in Newbridge is one of the estates affected by heavy rainfall. Residents are appealing for help and the provision of sandbags, and claim that raw sewage is flowing through the estate.

Laois County Council says Clonaslee village is one of the worst hit areas, with motorists urged to avoid the area for in the early afternoon.

The regional roads between Mountmellick and Ballyfin, and Mountmellick to Rosenallis, are also closed. O’Moore Street in Mountmellick was also flooded and many businesses had to close their doors for the day.

In Limerick, two crashes on the N18 brought traffic to a standstill while cars have been trapped in serious flooding on the N69 in the Foynes and Shanagolden areas.

Motorists are being advised to drive with care as the road conditions are described as treacherous.

There was extensive flooding across Kerry following overnight rainfall, and Gardaí are urging motorists to drive with care.

Bus Eireann was also advising customers that as a result of the closure of the N86 Tralee/Dingle Road there are diversions and cancellations in place.

There was a lot of flooding in the Clieveragh road and Ballybunion road areas in Listowel.

There was also extensive flooding in Ballyduff and Abbeydorney villages, on the Ballyduff Abbeydorney road, Ladies Walk, Ballyduff, and coming out of the Cashen in both directions near McCarthy’s bridge.

In Tipperary there was flooding on the main Thurles to Nenagh road - the R498 near Kilkeary.

Met Éireann forecaster John Eagleton said he expected the rain to abateto be followed by much colder weather.

It will get progressively colder with day time temperatures on Thursday between 5 and 9 degrees following a very mild spell when temperatures got up to 15 degrees in the south and east.

Temperatures will fall overnight on Thursday to minus 3 degrees in places as cold air comes in from polar areas.

Friday and Saturday will be bitterly cold with frost and ice.

“This rain is the transition from the very mild weather we have had for the last five or six days,” he said.

“Winter has definitely started. Some of the wintery showers we will get up in the north-west will fall as snow at night, but they won’t penetrate that far into the country. You will get bright, crisp days in the east.”