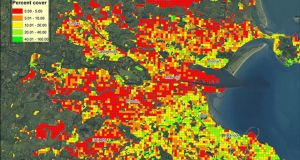 Graphic from a study of tree and canopy cover across Dublin. Image: UCD School of Geography

Living in a leafy suburb may do more than just boost property prices, as a new study has found that having more trees in urban areas can help to reduce the rate of asthma attacks.

In areas with high air pollution, trees have a significant impact by helping to remove pollutants from the air, according to a study by the University of Exeter.

The research, published today in the Environmental International Journal, examined data from more than 650,000 serious asthma attacks across 26,455 urban neighbourhoods in England, dating over a 15-year period .

The study concluded that the findings “suggest that tree planting could play a role in reducing the effects of air pollution from cars”.

“Trees can effectively remove pollutants from the air, and this may explain why they appear to be most beneficial where [air pollution] concentrations are high,” lead researcher Dr Ian Alcock from University of Exeter’s Medical School said.

It found that in areas of lower air pollution, open green spaces such as gardens and parks were more effective than increased tree cover at reducing the frequency of asthma attacks.

Dr Alcock said trees proved both a defence mechanism and an irritant for asthma sufferers. He explained that while trees can remove the air pollutants that trigger asthma attacks, they can also spread allergenic pollen. Foliage can retain build-ups of the irritating pollutants that would otherwise have been dispersed by wind.

“We found that on balance, urban vegetation appears to do significantly more good than harm,” he said.

Ireland has the fourth highest rate of asthma in the world. A spokesman for the Asthma Society of Ireland said: “We have known for some time based on similar minor studies that the effect of having more green spaces can be quite helpful. From an urban-planning perspective the more green spaces and trees the better.”

A study of tree coverage across Dublin published by UCD researchers last year found in the affluent area of Dublin 4 there was an 8:10 residents per tree ratio compared to a 30:1 ratio in Dublin 1.