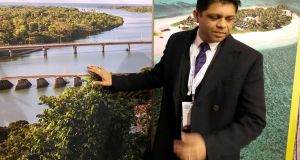 Fijis attorney general Aiyaz Sayed-Khaiyum at the COP23 UN Climate Change Conference in Bonn. Small island states of the South Pacific who are threatened by climate change feel the world has at started to respond to their plight. Photograph: Alister Doyle/Reuters.

Small island states of the South Pacific whose existence is immediately threatened by climate change feel the world has at last begun to sit up and respond to their plight.

The hosting by Fiji of the latest round of UN climate talks, which conclude today, has played its part, according to Reverend James Bhagwan, a Fijian Methodist minister.

It has also infused a greater sense of urgency among wealthier states who are more accepting of climate change reality. If the rise in global temperature is not limited to 1.5 degrees in this century, then islands will disappear, displacing many communities.

Rev Bhagwan, who represented the World Council of Churches at the COP23 gathering in Bonn, said: “There is a feeling that this is ‘a Pacific cop’, and the concerns of the most affected will be addressed.”

He said the concerns island representatives have laid out are “not just effects that affect me and my people but everyone on the Planet”.

The stability of the world’s climate was being undermined by rising temperatures in the oceans, which regulate the Earth’s temperature; acidification of the sea, an undermining of global fish stocks, the bleaching of coral and the killing off the phytoplankton on which many ocean dwellers feed.

The phytoplankton decline is of serious concern to Rev Bhagwan. “It absorbs half of the world’s CO2 emissions. If phytoplankton dies we lose 50 per cent of our air...it’s the equivalent of cutting down all the world’s rainforests.”

For those living in Fiji and across the South Pacific, the most immediate threats are rising sea water levels and an increased frequency of extreme weather events in the form of tropical storms.

“We are not just an island people, we are ocean people,” he declares. His membership of a “traditional voyager society” which is trying to revive sustainable sea transport is part of his mission; not just promoting use of the traditional Fijian canoe, known as a drua, but embracing innovation such as the combination of “sail and solar”. He is acutely conscious that 90 per cent of global transport is by sea and is a major emitter of greenhouse gases.

In his opening remarks to COP23 the Fijian prime minister Frank Bainimarama said the drua located in the foyer of the Bonn conference centre was also “to remind us of our duty to fill its sail with a collective determination to achieve our mission.”

Pacific islands suffer as decisions on investment to help them adapt to climate disruption take so long, Rev Bhagwan says.

“The longer it takes people [in the developed world] to commit and make meaningful actions, the more sea levels continue to rise.”

That translates into a greater volume of salt water which means people living in coastal areas cannot plant crops. This in turn threatens food security and heightens the likelihood of migration.

There is despondency and a lack of acceptance of the causes of climate change on religious grounds among some communities, he says. This is manifested in the belief that “this is end times - we cannot do anything...God is in control; pray and repent. There is no place for human action”.

Rev Bhagwan adds that he is driven - appropriately given his name - by a quote from the Book of James which says, “faith without works is dead.”

There remains serious challenges to be met so that people of the South Pacific islands can live sustainably and can respond appropriately to climate impacts.

He was heartened by the comments of French president Emmanuel Macron on the responsibilities of wealthy countries. But also by his emphasis on actions that are not just state-driven, but are gender inclusive and are in the best interests of vulnerable, marginalised communities.