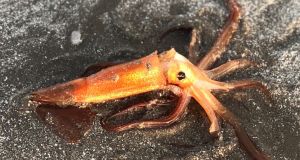 We discovered this little squid on Dollymount Beach, Co Dublin, and wondered what the species is and if they are common visitors to the east coast. It was 10-15cms in length.

On December 22nd this mosquito landed on my pillow.

In mid-January I was walking in a former pine forest that had been harvested when a mosquito landed on my hand and tried to feed. There was ice on all the standing water nearby.

I saw these geese on Ballinskelligs Bay recently. Are the Brent geese?

Yes. We don’t often see them in the sea as they spend more time feeding ashore.

I saw these colourful fungi in Donegal recently.

They are scarlet elf cup/cap (depending on the book), one of the few mushrooms fruiting in winter. They grow on dead wood.

This large bird was standing on the wall at the end of the pier in Dún Laoghaire and not bothered by many curious walkers. It seemed different to other herons that keep their distance.

The first frogspawn arrived in our pond on January 13th.

They always arrive first in the south.

I saw this starfish on Glassillaun beach. It’s much bigger than the usual ones I see on the beach.

It’s the spiny starfish, found mainly on the west coast from Galway to Kerry.