What exactly is rewilding and how can you be a part of it? 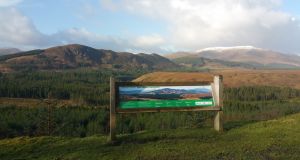 The word wilderness is evocative – conjuring up a potent mix of wonder, fear and even nostalgia in what is an increasingly urbanised world. But the concept of rewilding means different things to different people.

For some, it simply means letting large or small tracts of land go back to their natural state but for others it means the reintroduction of extinct species such as wolves, lynx and wild boar.

Padraic Fogarty, campaigns officer with the Irish Wildlife Trust and author of Whittled Away: Ireland’s Vanishing Nature (The Collins Press) says that the word re-wilding appeals as much to the soul as it does to the mind.

“There’s no definition for rewilding which is an advantage. It’s exciting and it peaks people’s interest. Over 100 people attended a talk on re-wilding we hosted in Galway recently. There wouldn’t have been the same reaction if we called it ecological restoration. People are desperate for a vision for nature and re-wilding provides some of that.”

George Monbiot, English journalist and author of Feral describes rewilding as “not just a collection of species but also their ever-shifting relationships with each other and with the physical environment”.

In other parts of Europe, brown bears, Eurasian lynx and grey wolves are been reintroduced with relative success

In Britain – and particularly in Scotland, the rewilding movement has captured the public’s imagination and efforts are being made to re-wild vast areas of land. Danish landowner, Anders Holch Povlsen – who owns approximately 1 per cent of Scotland – has a 200-year vision to re-establish native woodlands, restore peatlands, wetlands and rivers so as to enhance habitats, species and ecological processes. His Wildlands project includes the Glenfeshie Estate in the Cairngorms National Park which is already home to golden eagles, wild cats and red squirrels.

In other parts of Europe, brown bears, Eurasian lynx and grey wolves are been reintroduced with relative success. There are now breeding packs of wolves in Denmark, France, Norway, Germany and Spain.

A recent suggestion by Green Party leader Eamon Ryan to reintroduce wolves to Ireland to provide ecological balance was swiftly rejected by Minister for Arts, Heritage and the Gaeltacht, Josepha Madigan. “The reintroduction of a large predator which has been absent for 250 years might undermine existing conservation programmes and would do considerable damage to farming, she said.

The closest thing we have to a wilderness area in this country is the recently named, Wild Nephin in Co Mayo. In 2013, Coillte and the National Parks and Wildlife Service (NPWS) agreed to set aside about 15,000 hectares which includes Ballycroy National Park [mainly blanket bog] and the Nephin Forest as Ireland’s first candidate for a wilderness area.

In late 2017, the NPWS took over responsibility to manage a restoration/rewilding plan for Wild Nephin over 15 years from 2018 to 2033. However, this will not be a simple process as large areas are filled with coniferous plantations and rhododendron.

“The problem with re-wilding is that if you close the gate and walk away you won’t get the desired outcomes. The essence of re-wilding is to harness the power of nature to heal itself, but in places like Wild Nephin, will require human intervention to get to that stage,” says Fogarty.

Sam Birch, conservation ranger at Wild Nephin, says that work has already started. “We have begun to harvest the lodgepole pine and sitka spruce. Four thousand native trees were planted in river valleys in 2018 but we haven’t started removing rhododendron yet,” he explains. In the long term, Wild Nephin will be suitable for wild camping, hiking and mountain biking.

The Lough Boora Discovery Park in Co Offaly is another example of a wilderness area in Ireland. The raised bog - which had been stripped for turf by Bord na Mona for decades - has been transformed back into a mix of wetlands and forests. The abundance of wildlife - including lapwing, cuckoo, hares, frogs and over wintering ducks and swans - which has returned to the area is a testament to the power of re-wilding.

“The resurrection of Lough Boora has been astounding. It’s a great example of what can happen when nature takes its course,” says Fogarty.

Coilin MacLochlainn is a designer and sub-editor for wildlife magazines including Birdwatch Ireland’s Wings and the Native Woodlands Trust magazine. He has a vision for a re-wilding project in Wicklow which he believes could become the largest area of wilderness in Ireland. “My idea is to join up a lot of the semi-natural oaklands from Luggala to Shelton Abbey near Arklow. The Wicklow oaklands are already the best for woodland birds but if we could fill in the gaps across the mountains to have one continuous forest, it would be fantastic for nature,” says MacLoughlain.

We are losing wild plants at twice the rate of everything else and when people give their gardens back to nature, they become protective of these spaces

For his vision to become a reality, coniferous trees across Wicklow would have to be replaced with native Scots Pine and deciduous trees. “Sitka deer and sheep are currently preventing the regeneration of oak forests in Wicklow so you’d have to control the deer by bringing back wolves and keep sheep in meadows protected by dogs. A similar switch to a agroforesty and silva-pastoral happened in parts of Norway in the last 30 years so it could happen here too,” says MacLochlainn.

Alongside these grand rewilding projects are individual efforts to re-wild areas in towns, villages and private gardens. Garden designer, Mary Reynolds became so concerned about species and habitat loss in 2019 that she changed her focus from designing new gardens to encouraging people to re-wild their gardens through her website wearetheark.org.

“It’s not quite rewilding. We call it arking – which stands for acts of random kindness. We become the wolf, the bear or the beaver by providing the ecosystem services and ecological corridors linking different species. People have power to make a huge difference on a local scale in their gardens and local [public] spaces,” says Reynolds.

She now consults with people who want to know how to re-wild their gardens. “We can’t just leave it to go by itself. You have to remove lawns so that wildflowers can grow. They can’t compete with lawn grass. I don’t want people to dig the soil but to protect the soil and encourage it to heal itself,” she adds.

The key, according to Reynolds is not to plant imported or non-native plants so as to allow local wildflowers to emerge from their underground seedbank. If nothing emerges, you can collect seeds from local weeds and plant them or plant native organic wildflowers from the Irish wildflower seed company, Design by Nature, she explains.

“I advise people to create as many eco-tones as possible even in a small space. It’s about having an untidy, scrubby, messy brambly habitat for insects, animals and birds.

We are losing wild plants at twice the rate of everything else and when people give their gardens back to nature, they become protective of these spaces. It’s about being in service to nature. That’s what we can do to help the biodiversity crisis.”