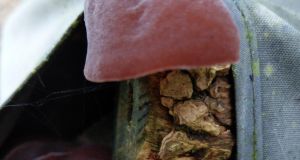 I saw this unusual ladybird on December 27th in a garden in Co Carlow. Is it an invasive species?
Michael Duffy, Ongar, Dublin 15

Can you identify this beautiful fungus, which is growing on a log pile in our yard?
Liz Butler, Naas, Co Kildare
It’s Auricularia auricula-judea, jelly ear fungus, also commonly called Jew’s ear because of an early misspelling of Judas. It is edible, though without much flavour, and is used in Chinese soup recipes.

This bee was buzzing around our allotment on December 30th. It was cleaning its legs and wings and performing some lengthy stretches in the sun. We wondered if it was a a queen emerging.
Emma Pallant, London N6
The bee is most likely the buff-tailed bumblebee and, yes, a queen that emerged early because of the unseasonably warm weather. She was grooming herself after hibernation.

It was so mild in Kerry on December 28th that the honey bees were flying and feeding on mahonia.
Tara Robinson, Killorglin, Co Kerry

There have been a two swallows on the river Corrib between Nimmo’s Pier and the Salmon Weir for the last few months. On December 27th they were joined by two more. Have they any chance of survival? There is still a lot of insect life around the river: brown trout were rising to small black flies on December 18th.
Niall O’Donoghue, Galway
The swallows will survive only if a cold spell doesn’t kill off the flying insects.