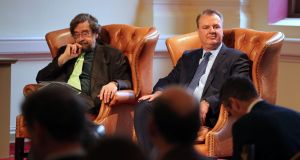 It does not make sense that Ireland is regarded as producing more greenhouse gases than Los Angeles, a city of 13 million people, a US scientist has told a conference on climate action in agriculture.

Prof Frank Mitloehner from the University of California, Davis, told the Irish Farmers’ Association event in Dublin that the case for methane arising from farming being treated differently to long-lived greenhouse gases, such as CO2, was undeniable.

He said that methane, the main greenhouse gas in livestock production, only lasts in the atmosphere for 10 years, whereas CO2 persists for up to 1,000 years, he said. Methane was short-lived but carbon from fossil fuels was “a one-way street” to rising emissions.

If herd numbers were kept constant, there would be no additional carbon added to the atmosphere while recycled carbon from methane would be consumed in a “biogenic cycle”, he said. If methane was reduced with the right incentives for farmers it could induce global cooling.

There was a reason why Ireland was green. “You have an enormous amount of forage in Ireland. The natural land use for a place like Ireland is the use of ruminant livestock because a lot of the land is not arable.”

A lot of land could not be used for crops as it was marginal, “it doesn’t have good enough soils for the most part and, therefore, it is used for grazing.” This had a massive beneficial impact as carbon sink.

Prof Mitloehner said improving efficiency and adapting new technologies were “the most effective ways to mitigate the impact of food production in contributing to emissions”.

He rejected criticism of his views on methane, notably by Johns Hopkins Centre of a Livable Future in the US.

Climate Change Advisory Council chairman Prof John FitzGerald, told the conference, Climate Action in Agriculture – A Balanced Approach, that all sectors must take climate action, as all sectors were to blame for failure to address the issue.

The agriculture sector had been set less demanding targets compared to other sectors, so farmers were not being scapegoated. There was a need to cut national heard numbers by between 500,000 and 1.5 million cattle, and reduce dependency on beef.If methane was to be accounted for in a different way, this had to scientifically proven and verifiable.

Teagasc research director Prof Frank O’Mara, said agriculture could reach its decarbonisation targets if key mitigation measures in Teagasc’s “roadmap” were adopted. This could be done while maintaining the national herd. Ground rules for reducing greenhouse gases up to 2030 were set; the hope was after that methane would be treated differently and greater allowance made on ability to land to capture carbon.

IFA president Joe Healy said the agri-food sector was actively engaged in climate action. “The future must be about safeguarding Ireland’s climate-efficient model of food production, while providing innovative opportunities for farm families and rural Ireland to climate proof their futures. Farming’s entrepreneurial spirit is ready to respond.”

But he warned: “Farmers cannot afford to be green if they are in the red.”

An Taisce environmental group has questioned the attempt to “rebalance debate around climate action”, claiming it was “likely to further mislead and misinform, rather than offer any scientifically-justified balance”.

Dr Mitloehner views, it added, “are highly contested by scientists and his comments are noted in published literature as textbook examples of efforts to create policy confusion with a view to further delaying or avoiding vital climate action.”

Scientists from Johns Hopkins University, it said, took the unusual step of issuing a rebuttal to Dr Mitloenher’s “mis-statements”, noting that cutting total emissions is the only meaningful measure of climate action and that animal agriculture has an enormous environmental impact.

On scapegoating farmers, it added: “In fact, critics, including An Taisce, are saying farmers have been misled by the IFA, which has worked hand-in-glove with the food processing industry, into supporting an agri-food strategy since 2010 that benefits processors.”

This had increased farmers’ input costs, financial risks and exposure to climate change impacts without offering any coherent plan for transitioning to less polluting forms of agriculture – “when total agricultural emissions continue to increase.”