Hundreds apply for job on the most westerly island in Europe 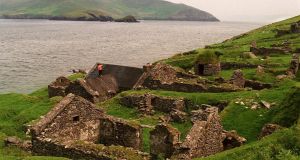 The Great Blasket Island off the coast of Co Kerry. Photograph: Pat Langan

More than 500 applications have been received for a position on the most westerly island in Europe – the Great Blasket Island off the coast of Co Kerry.

The post, requiring two people to manage the island’s accommodation and coffee shop, is available from April 1st to around the beginning of October.

Manager Billy O’Connor, grandson of the late Peter Callery, a Dingle solicitor whose company once owned most of the Blasket, says the level of interest has taken him by surprise.

Mr O’Connor, who ferries tours to the island on his boat The Peig Sayers, has done up three houses, including the writer Peig Sayers’s old home.

Last year the company advertised for a couple to live on the island so the coffee shop and facilities could reopen, and this proved hugely successful.

Massive publicity flowed from the social media accounts of Lesley Kehoe’s accounts of life on the island with her partner Gordon Bond in the summer of 2019.

This year the interest in the post has surpassed all expectations, with applications streaming in from all over the world since Christmas.

“A lot of people told us they want to move back to Ireland,” Mr O’Connor said, including Irish people from as far away as Australia.