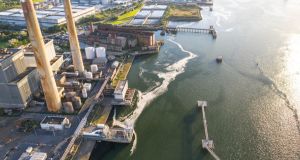 Poolbeg wastewater plant: Local residents and sports clubs using the bay are tired of the failure to address its problems. Photograph: Eoin O’Shaughnessy

The discharge of sewage from the Ringsend wastewater treatment plant into Dublin Bay is to be investigated by the European Commission.

Beaches along Dublin bay were shut to swimmers four times last year following wastewater overflows at the city’s treatment plant in Ringsend. The plant has been failing to cope with the amount of sewage it receives since it opened in 2003.

The committee has declared the petition “admissible” and has asked the commission to begin an investigation of the issue.

“The petitioner complains that waste water is being discharged from the Ringsend waste water treatment plant into Dublin Bay, designated a biosphere reserve by Unesco, ” the commission said.

“The petitioner believes that this threatens water quality, biodiversity, the ecosystem and the health of more than 300,000 inhabitants” and “requests that parliament ensure that the Irish Government complies with the urban waste water treatment directive and addresses the problems caused by waste water discharge from the Ringsend treatment plant” the commission said.

Local residents and sports clubs using Dublin bay had grown tired of the ongoing failure of the State to address the problems at the Ringsend plant, Mr Andrews said.

“There was raw sewage in Dublin Bay last summer and the local rowing clubs told me of paddling past lumps of it. Sinn Féin decided to lodge this submission, because whatever is being done it isn’t solving the problem.”

A spokesman for the Department of Housing, Planning and Local Government which has responsibilty for the matter said it had yet to be contacted by the commission, but noted the European Court of Justice had already ruled in March 2019 that Ireland was not in compliance with the waste water directive, “including in relation to Ringsend waste water treatment plant”, he said.

“Ireland is in the process of a work programme to address the outcome of the judgment,” he said.

Irish Water was investing more than €400 million in upgrading the Ringsend plant, he said. “Planning permission was granted for the project in April 2019. Irish Water estimates that infrastructure to achieve compliance with the urban wastewater treatment directive for a population equivalent of two million, will be delivered by the end of 2022.”

Above-average rainfall last summer had contributed to the problems in the bay, he said.

“There are various, complex sources of pollution that may impact on Dublin Bay. Some relate to waste water but also include sewer misconnections to streams, wildlife; and dog fouling. Dublin City Council, Irish Water and the other Dublin authorities are working together in a task force to diagnose the root causes and put in place programmes to solve these issues.”