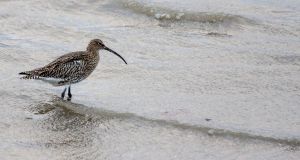 Biodiversity in Ireland “is in A&E and needs the full backing of political parties and the public working together to halt and reverse declines in species and habitats”, according to BirdWatch Ireland (BWI).

The incoming government must immediately set out “a sound pathway to halt and reverse biodiversity loss” in tandem with robust climate action, according to its “manifesto for nature” launched on Monday.

The environmental NGO calls for an overhaul of food and agriculture policy which places more emphasis on “high nature value farming” with at least 10 per cent of agricultural land designated as “space for nature”.

It proposes that 30 per cent of Irish waters be designated “as coherent network of marine protected areas underpinned by scientific rationale”.

Ireland biodiversity and ecosystems are in bad shape and in some cases even worse than global trends, according to BWI policy and advocacy officer Oonagh Duggan.

“Two-thirds of our regularly occurring wild bird species are red or amber listed birds of conservation concern; one-third of our wild bees are threatened with extinction; there’s been a 40 per cent decline in waterbird species in less than 20 years,” she said.

In addition, 85 per cent of internationally important and EU-designated habitats are in bad condition with agriculture impacting 70 per cent of those; only one-third of hedgerows surveyed are in good ecological condition, while river and estuarine water quality is declining.”

The Citizens’ Assembly’s move to consider how biodiversity loss should be addressed – agreed when the Dáil declared a climate and biodiversity emergency last May – needs to be pursued without delay, the manifesto states. “The time for lip service is over. We cannot delay any further and we must act together to save nature in Ireland.”

By 2030, at least 15 per cent of terrestrial habitats and seas need to be restored, especially those with high carbon storage potential such as peatlands, semi-natural grasslands and old growth woodlands, BWI suggests.

The budget for the National Parks & Wildlife Service must increase to €100 million annually, BWI says, Currently, it receives about €15 million to protect the nation’s biodiversity, “whereas €80 million is allocated to horse and greyhound racing”.

BWI calls for new legislation to protect hedgerows and for repeal of the 2018 Heritage Act, which removes oversight of local authorities on roadside hedgecutting and allows burning in uplands during March, which will impact breeding birds and is contrary to EU nature legislation.

BWI says “a single biogeographic unit” should be established on the island of Ireland by ensuring Belfast Agreement mechanisms are enabled to maximise opportunities for cross-Border conservation of wildlife, habitats and water, as well as co-operation on shared areas of environmental concern as “birds don’t know what borders are”.

The Social Democrats, launching its biodiversity policy, has called for a voluntary purchase of unprofitable farmland for converting to native woodland; doubling of protected nature reserves, legislation to eliminate pesticides, measures to improve urban biodiversity and the promotion and expansion of wildlife corridors.

“Biodiversity loss is one of the most urgent challenges Ireland faces. If we don’t meet this challenge head on, there will be catastrophic consequences, in particular for our entire food production system,” said Cllr Jennifer Whitmore, the party’s candidate in Wicklow.

“Our environment and our wildlife are robust, as long as they are given the time and support to recover. Working with farmers, who are guardians of much of our land, we can be a country where nature thrives again,” she added.