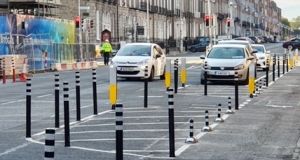 A “parking protected” cycle path was first proposed for Fitzwilliam Street four years ago. The 1km path from Leeson Street to Merrion Square would use parked cars to protect cyclists by swapping the position of car parking and cycle lanes, so that cyclists would travel beside the footpath and be separated from traffic by the parked cars.

Public consultation last year found 97 per cent support for the Fitzwilliam Cycle Route, with Dublin Chamber of Commerce, the Dublin Cycling Campaign and An Taisce among its supporters. Work was due to start on the scheme this year, but was deferred. However, the council has decided to implement an interim version of the scheme as part of its Covid-19 measures to improve cycle safety.

The South Georgian Core Residents Association had opposed the original scheme, which they contended was unsafe for pedestrians and residents trying to access their cars, but said interim measures represent the worst of all worlds as bollards as well as cars were used to create barriers from traffic.

“However, this interim solution is even worse, with unnecessary bollards and signage that are visually unappealing and intrusive and really rather distasteful.”

The council’s own policies for the area opposed visual clutter in the historic streetscape, he said. “The council is not living up to its own standards. These plastic bollards are visual pollutants and are creating a racetrack for cyclists and should be removed.”

Kenny Burns, who lives on Fitzwilliam Street Upper, said he was upset by the lack of consultation by the council. “This has been foisted on us by the council without any real consultation. Telling us what they are going to do, and then coming along and putting in this cycle path overnight is not consultation.”

Mr Burns said he felt having to access his car “in the middle of the road instead of from the footpath” was inherently unsafe.

Fianna Fáil councillor and architectural historian Deirdre Conroy said she supported the principle of the cycle path, but plastic bollards were inappropriate for use in any conservation area.

“Using bushes or trees instead of bollards would be more appropriate, particularly [in] the south Georgian core.”

The council has not responded to queries on whether it plans to remove the bollards.

The Fitzwilliam Cycle Route was originally proposed by then Fine Gael councillor Paddy Smyth, and was designed to eventually link the Grand Canal cycle route to all the south Georgian squares, creating a network of segregated cycle routes across the southeast of the city.