Sandymount cycle route to go ahead despite residents’ objections

Traffic impact likely to be worst on Merrion Road, where it could double, says council

Residents of Sandymount, Dublin are concerned about a proposed new two-way cycle track on Strand Road, which will turn the Dublin 4 road into a one-way street for general traffic for more than 2.5km. Video: Bryan O'Brien 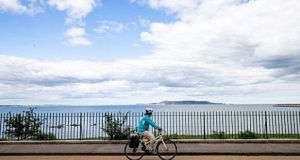 A two-way cycle track is set to be installed on Strand Road in Sandymount, Dublin, before the end of this year, despite opposition from some local residents.

Dublin City Council said it intended to press ahead with the cycle path, which will see a one-way system introduced for cars along the scenic coast road from Sean Moore Road to the Merrion Gates.

The sea side of the road will be requisitioned for cyclists and the remaining single lane will be for outbound traffic only, heading in the direction of the Merrion Gates. The measures, which are expected to be put in place within eight to 10 weeks, depending on any new coronavirus restrictions, will be subject to a six-month trial. However, the council has said permanent infrastructure will be put in place if the trial is successful.

The effect on traffic, particularly local traffic, was chief among the concerns raised.

The council’s traffic modelling indicated the biggest impact would be on the Merrion Road, with vehicles heading into the city no longer allowed to turn right across the Merrion Gates. Traffic volumes are predicted to double on the section north of Merrion Gates, the council said.

Traffic through Sandymount village, along Park Avenue and towards Sandymount Road, was likely to increase by 20 per cent, but the council said traffic volumes were in general at 80 per cent of pre-pandemic levels, “so this level of increase will at worst return this area to pre-Covid volumes”. This also assumes there would be no shift to cycling as a result of the new cycle facilities, the council said.

Traffic on Serpentine Avenue and Tritonville Avenue may increase by up to 36 per cent, “so this route is the one that will require the most careful monitoring” over the course of the trial, the council said.

“The city council believes that the trial is an opportunity in general to reduce the traffic volumes on Strand Road while implementing a range of measures to ensure that traffic volumes on other streets do not reach levels that would have any seriously adverse impacts on residents.”

The council said it had not been possible to devise a route that would keep two-way traffic on Strand Road, and with current public transport restrictions, it was essential safe cycle infrastructure was put in place.

“The current situation of no cycling facilities at all means that this route is not an attractive route and is unsuitable for cycling to schools in the area. Therefore, at a time when the Government is urging people to walk and cycle where possible, the lack of a safe route in this area is highlighted.”

The route would facilitate a connection to the new segregated cycle path from Blackrock to Sandycove, the council said.

“The route then from Strand Road to the Dún Laoghaire Coastal Mobility Route will provide 10km of mostly protected safe cycling facilities.”