‘He has been phenomenal for economy of the place,’ says Dingle Oceanworld director 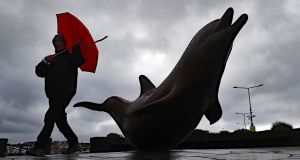 A sculpture of Fungie in Dingle, Co Kerry. Fungie has been missing for more than a week now. Photograph: Niall Carson/PA Wire

A public representative in Kerry is calling for financial supports and other measures for fishermen and businesses in west Kerry “should Fungie not return”.

The dolphin, missing for more than a week, was the prime means of livelihood for up to 13 families involved in Fungie boat tours in the harbour for more than 30 years. But he was also one of the main attractions bringing people to Dingle and west Kerry in the first place, said Fianna Fáil councillor Breandán Fitzgerald, a representative for Corca Dhuibhne.

The supports for the tour operators could come in the form of diversification, perhaps a look at marine craft licences that would encompass whale watching and other marine tourism which could extend beyond the harbour where the dolphin tour boats operate, the councillor said.

A whole industry has been built around the dolphin in the form of publicity, film and documentary, and gifts.

The “awareness” that Fungie also brought to everyone about marine life and the environment could be built upon in the form of an interpretation centre or museum, Mr Fitzgerald said.

The first step would be a co-ordination group, bringing together tourism bodies, the Department of the Marine, Dingle Harbour bodies and the local authority, he said. “We need over the winter to put the heads together and investigate what supports are out there and can be put in place. I hope obviously Fungie comes back but even if he does not return, this isn’t the end of his story.”

Caroline Boland, from Dingle Peninsula Tourism Alliance, said: “You couldn’t put a value on how [Fungie] has inspired us all and he brought a magical experience to the bay.”

As the search for Fungie continues, marine biologist and director of Dingle Oceanworld Aquarium, Dr Kevin Flannery, said they were hopeful he was still alive. “He has been phenomenal for the economy of the place and he transformed the views of the millions of people who have visited here,” he said.

“The families, teenagers and children who have visited down through the years came to realise that the sea is a place with beautiful and happy creatures, like him; that it is not a place for dumping plastic and not a place for harvesting.” – Additional reporting PA