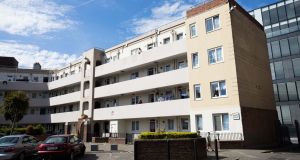 Pearse House: in 2018 residents held a protest due to ongoing rat infestations in the complex. Photograph: Tom Honan

One of Dublin’s oldest social housing flat complexes, which was proposed for demolition two years ago, is to undergo a major refurbishment and retrofitting programme.

Dublin City Council said the redevelopment of Pearse House, built in 1936-1938 in the southeast inner city, would take 12-15 years, reduce the number of flats in the complex and cost up to 60 per cent of the price of building new apartments.

The complex of 345 flats on Hanover Street, close to Pearse Street station, was designed by renowned architect Herbert Simms and is one of a small number of social housing projects on the city’s record of protected structures.

Considerable investment has been made in recent years in attempts to modernise the building, including the installation of new windows and central heating, as well as roof and ventilation upgrades. However, the council said the flat were “below space standards compared to new-build ones” and were “expensive to heat and at risk of condensation”.

In October 2018 residents held a protest outside the council’s offices due to ongoing rat infestations in the complex. The following month the council’s housing committee voted to start the process of “delisting” the complex so the dilapidated flats could be demolished and replaced with “decent modern accommodation”.

Although the demolition of old rundown flats was supported by the council’s head of housing, Brendan Kenny, the council’s architecture department was opposed to the destruction of blocks built by Simms.

Proposals to instead refurbish and reconfigure the flats will be presented to councillors on Monday.

The council is proposing to either amalgamate the existing flats, which would bring the number in the complex from 345 to 215, or to amalgamate and add an additional floor, to give a total of 275 flats.

In addition walls, floors and roofs would be insulated, PVC windows replaced with “historically appropriate” aluminium glazing and renewable sources of heat and hot water installed.

The council estimates the cost at about 50-60 per cent “of equivalent new build”, depending on the option chosen. The programme of work would take place in a “minimum of 11 phases” over 12-15 years.