Beijing’s plans for carbon neutrality by 2060 will have global impact, says IIEA report

The upcoming US election has been described as 'the most important election in our lifetimes' by environmental scientists. Video: Enda O'Dowd 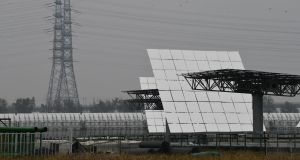 Polluted skies over a solar power generation base in Yanqing, north of Beijing, in September. Photograph: Greg Baker/AFP via Getty Images

China’s ramping-up of climate ambitions “would make a profound contribution” to efforts seeking to keep the rise in global temperatures well below 2 degrees in line with Paris agreement targets, according to analysis by the Institute of International & European Affairs (IIEA).

Beijing’s recent declaration that it will hit peak greenhouse gas emissions before 2030 and become carbon neutral by 2060, is “a significant shift” in the global climate agenda, the IIEA concludes – and is driven by geostrategic considerations, energy security concerns, intense urbanisation in China, and exponential growth of its middle-class.

In the geopolitical context, the paper adds, the move was primarily driven by the deterioration of US-Chinese bilateral climate relations since the election of president Donald Trump in 2016, and the US pulling out of the Paris climate pact. Mr Trump stated he believes climate change is “a hoax” and “the concept of global warming was created by and for the Chinese in order to make US manufacturing non-competitive”.

China’s president Xi Jinping has sent “a pointed geopolitical message to the US by outlining his country’s ambitious climate agenda in advance of the upcoming presidential election”, while attempting to offset any scaled-up demands or pressure that may arise should Joe Biden be successful, the paper adds. “The US is now the only major polluting country which has yet to set a target to end its contribution to the climate crisis.”

“Taking a leadership role in international climate action efforts may deliver geostrategic and reputational benefits to China as it navigates a trade war with the US, and faces international sanctions in response to its mass internment of Muslim Uighurs in Xinjiang province, and its promulgation of a robust state security law in Hong Kong, ” he adds.

Given China’s unsustainable energy mix (it is currently responsible for 28 per cent of global emissions and 25 per cent of the world’s coal), a big shift in its energy mix was anticipated, but “the scale of its ambition was not”.

The announcement was also prompted by overcrowding in urban areas, where more than 700 million people live

Covid-19 has had a major impact on the global energy sector, and though China produces more coal than any other country, it still relies on imports to meet demand. Moreover, “much of China’s foreign energy supply, including oil, comes from politically destabilised regions,” O’Callaghan-White notes.

“By producing more of its own clean energy, China will reduce its reliance on fuel imports and the risks of energy disruption which could compromise its economic and geopolitical agenda.”

The announcement was also prompted by overcrowding in urban areas, where more than 700 million people live. This “intensifies smog and environmental degradation in cities. Air pollution is estimated to be responsible for more than 1 million deaths every year in China.”

While political dissent and protest is rare and harshly punished in China, in recent years major demonstrations voicing dissatisfaction with air quality took place in many Chinese cities. It led to Mr Xi vowing to clean up air and water quality and to make China an “ecological civilisation”.

The government’s new climate pledge may serve as a signal to the Chinese people it is serious about taking sustained action to improve air quality in its cities, the paper suggests. Meanwhile, to maintain the support of a growing middle-class constituency, the Chinese government needs to be seen to pursue “robust environmental and climate action”.

China’s climate-neutral pledge is likely to not only “strengthen global efforts to reduce rising temperatures, it will also coincide with a positive impact on China’s economic power and competitiveness,” the paper concludes.

China’s heft and significant climate ambitions could have a transformative impact on international “green” energy markets, it notes. “This would leave China well-placed considering its technological expertise in renewables has established it as a leading exporter of clean energy technology, creating a balance of trade advantage which lends impetus to the country’s economic growth.”

While the European Commission has sought to consolidate the EU’s global leadership role in developing renewable hydrogen fuel, “European companies may lose out to a China committed to carbon neutrality given the size of the Chinese market and the benefits that accrue from its economies of scale,” it warns.

The report, Course Correction: China Is Going Carbon Neutral, is available from iiea.com