Residents of historic North Great George's Street in Dublin city centre are concerned about the impact a proposed new co-living apartment block on nearby Hill Street will have on the area. Video: Bryan O'Brien 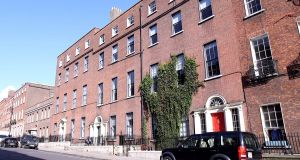 Expanding a proposed co-living scheme in Dublin’s north inner city will “destroy the setting” of historic North Great George’s Street and set a “serious and unwelcome precedent” for the city’s Georgian core, heritage groups have warned.

Hill Street runs parallel to North Great George’s Street, one of the best-preserved 18th-century streets in the capital.

The developer has applied to Dublin City Council to incorporate 38 Hill Street into the development, with an additional six-storey building, bringing the total number of beds to 150. It has also sought to remove the requirement for cooking hobs in all units.

The North Great George’s Preservation Society, which is pursuing a judicial review of the decision to approve the original scheme, said the expansion would have an even more damaging impact on the historic street.

“It impacts on the protected structures on North Great George’s Street in a similar manner, destroying the setting of these protected structures,” said society chairman Tom McKeown, adding that the additional building “creates a greater and even more detrimental impact on adjoining properties” in terms of “overlooking, shading, outlook and nuisance”.

The Irish Georgian Society said the addition of 38 Hill Street would have a particularly “significant detrimental impact” on the character and setting of 38 North Great George’s Street, a protected structure that would be directly behind the new development.

This house “is particularly accomplished”, society executive director Donough Cahill said. It was built in 1785 by Charles Thorpe, who went on to become lord mayor of Dublin in 1800, and was later occupied by Prof John Pentland Mahaffy, founder of the Irish Georgian Society and tutor of Oscar Wilde.

If built, the extension would “present an incongruous and anomalous addition to the street-scene. It would dwarf the established built form in the vicinity and detract from the character of the area,” Mr Cahill said in a submission to the council. “It would also further undermine the integrity of the adjoining houses along the eastern side of North Great George’s Street which already face the prospect of having a high-density six-storey structure built in their back gardens.”

An Taisce has also objected to the expansion, arguing the permitted development “already raises serious concerns” in respect of its relationship with North Great George’s Street. “The proposed extension into the site at 38 Hill Street would increase again a bulky and unsatisfactory building adjacent to the highly sensitive ... conservation area and protected structures.”

In addition, the coronavirus pandemic “raises serious questions for shared accommodation or co-living as a sustainable, viable use for the shorter and longer term”, An Taisce said.

The developer said 38 Hill Street was a vacant industrial building and the proposal would ensure it did not remain unoccupied and derelict. It would be one storey lower than the permitted scheme and was designed to minimise the impact on adjoining homes, Hill Street Limited Partnership said.

In relation to the removal of the requirement for individual hobs, it said there would be one kitchen for every 5.3 residents and a situation where demand for cooking facilities would exceed availability would be “extremely rare”.

Residents will be less dependent on kitchens as they “will work in industries where food/meals are provided” and also have access to restaurants or takeaways “on their doorstep”.

‘In 2018 I wrote publicly about my heritage. Soon after, the anti-Semitic messages began’
10